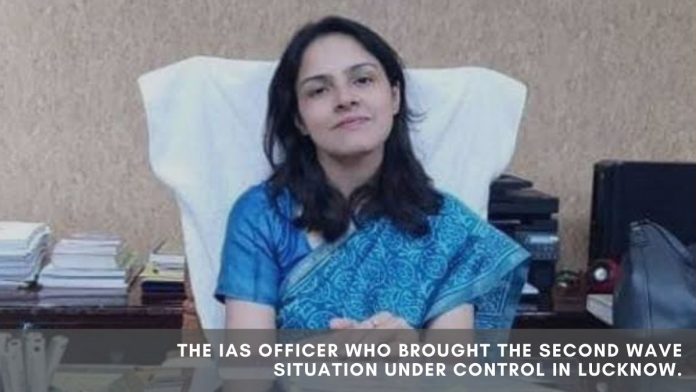 Just when the city was seeing a staggering number of cases in the second Covid-19 wave and the serving DM Abhishek Prakash had tested positive for Covid-19, IAS officer Roshan Jacob took charge as the Lucknow District Magistrate (DM) on 17th April. She herself had recovered just two days prior to taking charge and the city was recording cases as high as 6000 per day with a positivity rate of 50% – with people were struggling to find beds, oxygen and treatment.

Finally on June 2nd, when Roshan handed over charge and went back to her role as the director of the mining department, she had managed to bring back the number of cases to as low as 100 per day, with the positivity rate below 1 per cent.

In just over a month, Roshan managed to contain Lucknow’s spread, earning praise from not only Chief Minister Yogi Adityanath but also her peers.

Due to her commendable work, an order for her continuation was issued by UP Principal Secretary Mukul Singhal asking Roshan to continue as the officer in-charge for Covid, even when DM Prakash rejoined duty on 27th April. She has since been appointed as the senior nodal officer through an order issued by the department for appointment on 15th May.

As per a report in The Print, the officer visiting patients admitted in hospitals and checking up on those in home isolation nearly every day helped her in closely coordinating the tasks, her colleagues said.

Bhuvanesh Kumar, Principal Secretary, Animal Husbandry, Dairy and Fishery department, who was appointed as senior Covid nodal officer during the same period said, “Roshan Jacob brought some major systematic changes that were needed to control the Covid crisis. She visited homes to ensure that help had reached.”

“Roshan ma’am has been a guiding light; she has miraculously solved problems in Lucknow and we all look up to her. She would jump to action promptly and handle problems at their grassroots,” added a UP DM who didn’t wish to be named.

At the time when Roshan took over, the city’s Covid response was in a big mess — SOS calls were unattended, the district Covid centre was dealing with a deadlock situation, hospitals were not updating figures on empty beds, patients were waiting five to six hours to find one, there was a backlog of test reports and people were losing lives right outside hospitals without treatment.

Roshan stepped up the efforts of the Rapid Response Team to handle the crisis. The Rapid Response Teams were made up of Community Health Centres (CHC) doctors, ASHA workers and auxiliary nurse midwives. They provide medical kits, visit houses of people in home quarantine, check on home isolation cases, and urge those symptomatic to get tested.

She joined the Rapid Response Teams visiting the homes of Covid positive patients and their primary contacts. Officials working with her said, every morning, she made it a point to visit Covid patients admitted in hospitals.

“Three hours of her over 12-hour workdays were spent checking up on patients. That’s how her mornings would start,” an official said.

Roshan Jacob told ThePrint that her way to handle the crisis was measures to “contain the panic,” which included offering medical kits to even those who were symptomatic but are waiting for test reports due to the backlog.

“My solution to handle the crisis was to handle the panic in people by strengthening the home treatment protocol through the Rapid Response Team. I instructed them to speak to the patients offering words of peace,” Roshan said. “The idea was also that drug distribution should be more liberal. This way, the patient also finds some solace that ‘my treatment has started’.”

“I observed the manner in which the RRTs behaved; there was an element of coercion,” she said. “We had to ensure that it was not a punishment but a service. There’s no need to force or run after people for testing.”

The IAS officer also didn’t just limit herself to checking up on patients during RRT visits, but also made district command centre employees call them up for feedback. “They called up 600 patients every day to check on the behavior of the RRTs,” she said.

Moving a step ahead, Roshan also cancelled the barricading and sealing of houses of positive patients by the Lucknow Nagar Nigam through a written order.

The officer also stepped up the ‘Hello Doctor’ system, a 24×7 tele-calling seva for those in home quarantine. This facility was in place during the first wave but had closed down later. Roshan inducted 216 doctors — 150 Allopathic and 66 Homeopathic — into this system and divided them block-wise.

According to data accessed by ThePrint, between mid-April and mid-May, the ‘Hello Doctor’ fielded over 7,300 calls, for an average of 215 calls a day.

The IAS officer then streamlined bed allotment. She told The Print that when she visited ICUs of private and government hospitals, she realized that the bed positions shown on the government portal were erroneous, leading to a major bed allotment crisis.

According to the officer, the provision of mandatory letters from chief medical officers (CMO) for admissions in private hospitals, in place during the peak of the pandemic, had led many dying while awaiting
treatment. Roshan spoke to senior administrative officials, and the norm was done away with in Lucknow on 22 April.

She also stopped the system of the Lucknow command centre sending requests to hospitals for beds, and instead personally began assigning patients to hospitals, depending on the bed status.

“She went to all private hospitals to get actual bed status. She also held meetings with senior doctors, informing them about complaints and to check behaviour with patients. Everyone knew that she would reach the spot if they didn’t show the truth,” one of Roshan’s colleagues, who did not wish to be named, said.

When Roshan had joined, the integrated command centre struggled with a deadlock situation — calls lining up but patients unable to find a bed. “On one such day, there were around 276 calls made to the command centre by 3 pm but only one person would have got hospital admission,” a senior official said.

In the two weeks since the beginning of May, the Lucknow command centre is running on zero pendency.

Roshan also ordered lodging FIRs against hospitals for overcharging patients as some were found overcharging upto 882 per cent more than the government approved Covid-19 package of Rs 18,000 per day.

“People were really taken for a ride by these hospitals; it is a controversial area but it was the need of the hour,” Roshan said.

Meanwhile, to handle the oxygen crisis in the district, the IAS officer monitored oxygen tankers with help from the home department in real time, and also checked pipelines of hospitals for oxygen wastage. Lines with leaks were changed in two days.

Senior government officials said that Roshan’s intervention averted mass casualty due to lack of oxygen in the district in the last week of April.

“There was a night when patients from private hospitals had to be shifted to KGMU Lucknow due to an oxygen crisis. Also there was a huge chaos on the transportation of oxygen. With her intervention, two oxygen tankers with police escorts reached and we averted mass casualties,” a senior government official said.

“She also improved the hospital administration and their management a lot, including availability of oxygen. It is because of her that Lucknow was able to handle the most critical period during the second wave,” Bhuvanesh Kumar, who worked closely with the IAS officer, said.

Thus, Roshan Jacob proved once again what a stellar difference a committed and hardworking civil servant can make in the lives of people. In the midst of a crisis, its the bureaucracy that can either make or mar the lives of the common man. And this Lucknow-based IAS officer is a proof that so long as there are enough officials like her, there is always hope for even at the very bottom of the pyramid to find relief in a calamity.

As the Central Government hopes to control the spread of Covid-19 with the new phase of vaccination starting May...
General News

Andhra Pradesh, Assam, Gujarat, and Punjab are all set to commence a two-day dry run for the corona virus...
General News

Following the footsteps of UK & the US, India could be the next big country to approve emergency-use approval...

India to Approve AstraZeneca Vaccine for Emergency Use by End of...