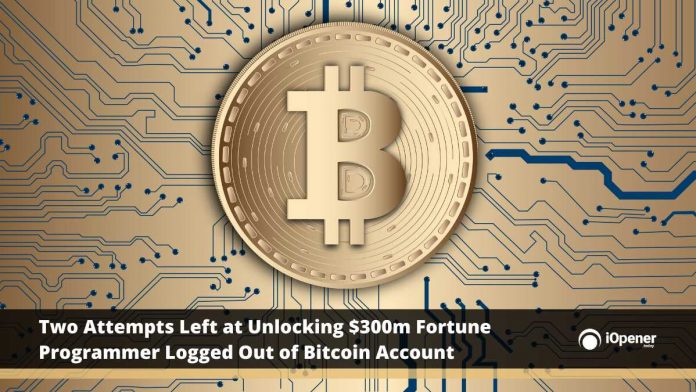 Stefan Thomas, a San Francisco-based computer programmer, is living through the world’s most expensive story of being so near yet so far. He’s sitting on a treasure worth almost $300 million dollars, except that the treasure is in bitcoins, locked up in a tiny, encrypted hard drive called IronKey – and he doesn’t have a clue on the password to unlock it.

Having exhausted 8 out of his 10 possible tries to unlock the hard drive, Stefan is just two chances away from losing his entire collection of 7,002 bitcoins that he has amassed over the years.

The New York Times first reported this story, wherein they mentioned that Stefan lost a small piece of paper on which he had the password written, and now he cannot recall what it was.

“I would just lay in bed and think about it,” Mr Thomas told NYT.

And added, “Then I would go to the computer with some new strategy, and it wouldn’t work, and I would be desperate again.”

Stefan’s predicament has attracted worldwide attention, and its not just his story but also about the whole structure governing cryptocurrencies and their administration.

A German-born software programmer, Stefan had been an early investor in the cryptocurrency – back from the time when each bitcoin was hardly worth a few dollars. Over the years, the cryptocurrency has boomed in valuation, currently worth an eye-popping $34,000 each.

Many have hailed the digitized currency’s decentralized and de-regularized administration, while on the other hand, there are also many critics that take issue with the lack of stability and risks associated with cryptocurrencies.

“As investing in Bitcoin today has grown into something very elaborate and worthy of long hours of strategizing, early investors in the cryptocurrency did not have so much to fear.

“Today, though, some are left stranded, inches away from crores of rupees of wealth that could have been theirs,” informs a report in the leading media outlet News 18.

Stefan, however, is not just the first or the only individual to have lost a fortune in bitcoins. Some others such as Welsman James Howells reportedly threw away 7500 bitcoins in a landfill a few years ago; they’d be worth well over quarter-of-a-billion dollars, had he still been in possession of them.

Cryptocurrencies like bitcoins, unlike equities or commodities, do not have any material physical value, as a result of which the transactions that fluctuate its valuation cannot be controlled by any regulatory body.

Thus, it is also possible for unscrupulous elements to manipulate the value of cryptocurrencies without leaving behind any traces to track, or any law to hold them accountable. Thus, Thomas today can rue his luck, and spend sleepless nights worrying about that one password; it is quite likely that by the time he discovers it, if ever, the bitcoins would still be worth as much.

Amazon May Accept Payments In Bitcoin, Ether And Other Cryptocurrencies Soon.

Soon Amazon may allow users to pay in Bitcoin and other cryptocurrencies. Amazon’s latest job postings suggested that it...

Amazon May Accept Payments In Bitcoin, Ether And Other Cryptocurrencies Soon.