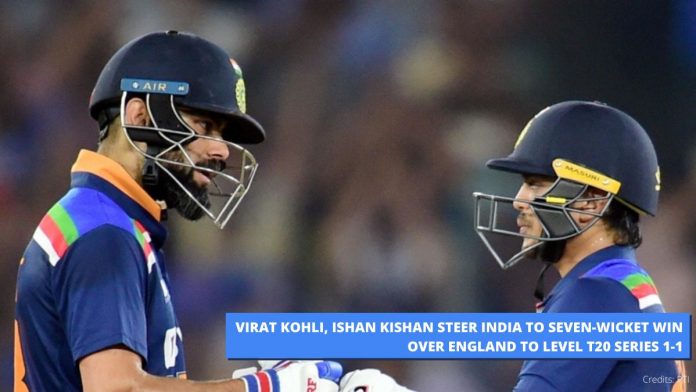 Indian skipper Virat Kohli and debutant Ishan Kishan steered India to a seven-wicket win over England to level the T20 series 1-1 on Sunday, at the Narendra Modi Stadium in Ahmedabad. Virat Kohli sealed the win for India with a six in the second T20I of the five-match series. After being outplayed by England in the last match, the hosts bounced back with an impressive performance to record this win. While Virat Kohli regained his form in this match with an outstanding batting performance, debutant Ishan Kishan announced his international T20 debut in style with 56 runs off 32 balls.

Earlier England set India a target of 165 runs, and chasing the score, India had a poor start, losing KL Rahul for a duck. But after the arrival of Kohli, India began to gain momentum and also saw the skipper build an impressive partnership together with debutant Ishan Kishan. Later, Captain Kohli went on to score an unbeaten knock of 73 in 49 balls, to help India reach 166 for 3 in 17.5 overs.

Kishan became the first Indian to hit fifty on T20I debut in 10 years when he registered a half-century. Rishabh Pant also made a significant contribution of 26 runs, and Shreyas Iyer remained unbeaten at 8 runs with Kohli.

Captain Virat Kohli’s unbeaten 73 runs broke many records too. He became the first-ever batsman to reach 3000 T20I runs. Also, taking just 226 innings, he became the fastest captain to reach 12,000 runs in international cricket. He also overtook Rohit Sharma to record most 50-plus scores (26) in T20I cricket.

The visiting bowlers couldn’t really perform their best in the second T20I, with Sam Curran, Chris Jordan and Adil Rashid getting a wicket each. Jason Roy (46 off 35) once again missed out on a half-century as England team could only add 164 runs for 6 in 20 overs. Meanwhile in India’s bowling department, Washington Sundar and Shardul Thakur were in good form, when they took two wickets each. Also, Bhuvneshwar Kumar and Yuzvendra Chahal got a wicket each. This impressive win has helped India level the series at 1-1 in the 5-match series, with the third T20I scheduled for March 16. It will be worth watching Eoin Morgan and company respond back to the defeat in the next match.

Historic Win for India in Australia, Match & Series Wrapped Up...