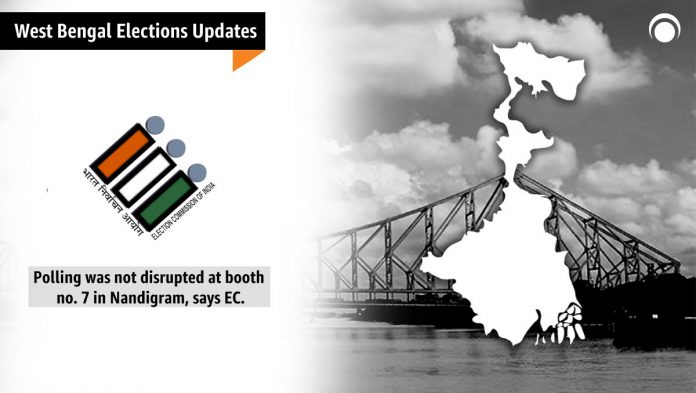 West Bengal Elections Updates: Polling was not disrupted at booth no. 7 in Nandigram, says EC.

West Bengal voted in the second phase of the Assembly elections on Thursday. The state saw some political turbulence with the ruling TMC and CM Mamata Banerjee alleging that the BJP captured booths at some constituencies. Workers from the TMC and the BJP clashed at Nandigram with the EC seeking report on violence during polling in the constituency.

On Thursday, the Election Commission (EC) announced the report of its general observer in West Bengal that the voting was not disrupted at any moment at polling station number 7 in Nandigram, from where Chief Minister Mamata Banerjee is contesting and had stayed there for one and a half hours due to a face-off between the TMC and BJP cadre.

The general observer Hemen Das, an IAS officer, and police observer Ashutosh Roy (IPS) were asked to go to the spot immediately which is at Boyal Moktab Primary School in Nandigram.

The panel said the general observer’s report was received at 4.06 pm.

The report quoted as: “…Polling at PS no 7 (Boyal Moktab Primary School) is going on smoothly. Hon’ble CM, who is also a contesting candidate, has left the place at about 3.35 pm after staying here for nearly one and half hour. It may kindly be noted that polling was not disrupted at any moment. Till now, 702 votes, out of 943, have been polled. It is 74 per cent.”

The observer said that nearly 3,000 people were there when he and the police observer reached the polling station. “All have left now,” he said. The EC also stated that a separate handwritten complaint was received from the chief minister via the chief electoral officer (CEO) of West Bengal late in the afternoon. The same has been forwarded to Special General Observer Ajay Nayak and Special Police Observer Vivek Dube under intimation to CEO. They have been asked to send a report by 6 pm on Friday. The EC also stated that in any case, anecdote reportage of any kind is not a substitute for hard empirical evidence and it was always committed to inquiring into specific instances of violations of its guidelines and taking swift action.

The state recorded 80.43% voter turnout till 5 pm, said the EC. The fate of 171 candidates was sealed decided by about 75 lakh voters in the second phase where 652 companies of the central security forces have been deployed to prevent any untoward incident.