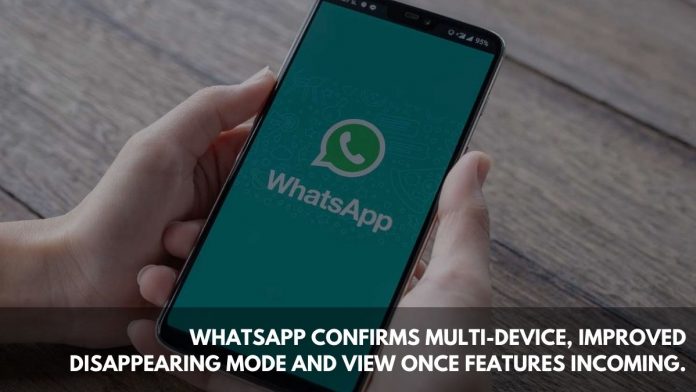 WhatsApp confirmed that the messaging platform would let users connect up to four linked devices using a multi-device feature. Company CEO Will Cathcart and Facebook chief Mark Zuckerberg have confirmed their developments to WABetaInfo, a notable publication that tracks all WhatsApp-related updates.

Mark Zuckerberg said, “It’s been a big technical challenge to get all your messages and content to sync properly across devices even when your phone battery dies, but we’ve solved this and we’re looking forward to getting it out soon!” The feature of the multi-device support would enable users to access WhatsApp on different devices such as laptop or tablets without the main app on the smartphone. The app will also be accessible via iPad and the company will open up the beta for more iOS users soon. Currently, to use the WhatsApp web or WhatsApp desktop app, users need to ensure connectivity with the app on the smartphone.

The company released the Disappearing Messages feature last year that wipes out messages and media files from individual or group chats after seven days if enabled. The feature needs to be enabled individually. However, Zuckerberg confirms that the improved disappearing mode would automatically start ephemeral messages in new chat threads. He adds on that WhatsApp will also get View Once, so the recipient can only view photos and videos once before they disappear from the chat. “We’re also about to start rolling out ‘view once,’ so you can send content and have it disappear after the person sees it,” Zuckerberg said. In the report Zuckerberg and Cathcart said that the new features will be available to users in a public beta in the next month or two.

WhatsApp is yet to confirm details over the chat migration tool that is currently available in beta form. The update will be significant for those planning to switch devices between Android and iOS.

CDS General Bipin Rawat And 12 Others Died In Helicopter Crash...