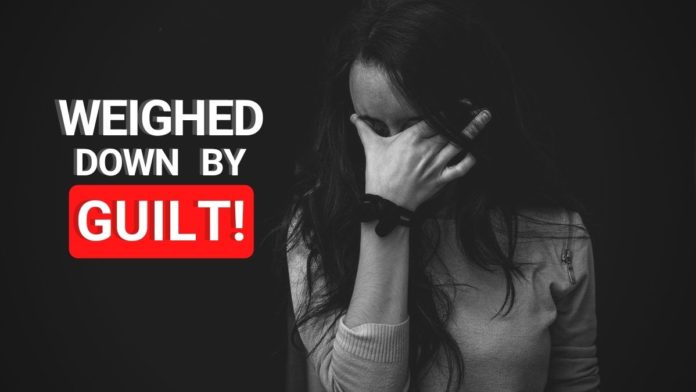 WEIGHED DOWN BY GUILT!

Manu and his sister Reena always looked forward to visiting their grandma during their school vacation. She had a huge farm and reared some cows and ducks. One summer, while they were throwing pebbles at the pond, Manu accidentally hit one of grandma’s ducks and it died. Too afraid to tell anyone, Manu and Reena buried the duck away. That night, at the dinner table, Manu could hardly look straight into his grandma’s eyes. On the days following that incident, Reena would ask her brother to do her share of household chores. If Manu refused, she would threaten to inform grandma about the incident. The longer Manu complied with his sister’s whims, the gloomier he became.

Everyone has dealt with guilt at some point in their life. Sometimes others hold us guilty and sometimes we carry secret guilt. Either way, the guilt weighs us down. We can make excuses, cover-up or even try to wipe it out of memory, but deep within, guilt pricks our conscience and robs our peace. Dwelling on guilt also affects our relationships, as it did for Manu. Until one day, walking up to his grandma, he confessed and asked for her forgiveness. To his surprise, she answered, “Manu, I was standing by the window that day and saw everything. I was waiting for you to come and tell me. You were forgiven already. You didn’t have to carry the guilt anymore”.

As human beings, we are prone to err and we commit mistakes. Guilt makes us believe that it’s better to hide in the dark than face the light. But we are actually missing great peace by believing this lie! Admitting our faults or confessing a sin may be tough for a moment but it’s worth the forgiveness and freedom. No matter how small or big, light, or dark, recent, or long, there is no guilt that you deserve to be tied down to because God has already forgiven you. All you need is to come to him as you are.

“One of the brightest minds of our college”, the principal exclaimed. Ancy was the Zoology department topper at her...
Power-up

Where’s the shame in that?

We all have lived, or still live, in the 'no regrets' phase of our life, the age when we...
Power-up