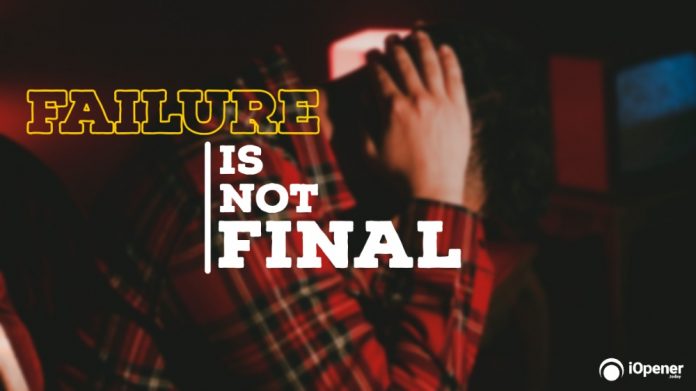 Failures are the stepping stones to success and Failure is not final. The wrong view of failure causes more damage than failure itself.

Every adversity, every failure and every heartache carries with it the seed of an equivalent or a greater benefit.

Failures can never be an end for those who do not give up. Some people view failure as the final word and think there is nothing beyond it, while others are able to look beyond.

“Failure and defeat are life’s greatest teachers, but sadly, most people, and particularly conservative corporate cultures, don’t want to go there.”

In fact, we learn much more from our failures than our successes. And if we allow failure to be our teacher then the phrase “Failures are the stepping stones to success” becomes much more relevant in our lives.

It takes immense courage to face failures and rise again. But some people even go to the extreme of committing suicide as they believe they have given all they could and have no hope left for living.

Don’t allow the experience of defeat to douse your spirit. Going from success to success is relatively easier, while going from failure to success is dauntingly tough. At the point of failure, an individual may conclude by saying, “I’m a failure.” However, no setback can make us a failure in life, because failure are just the stepping stones to success that contributes to our growth.

Being an entrepreneur par-excellence, Steve Jobs came up against a devastating failure in his career, when Apple’s board of directors fired him. But he embraced this setback to discover a great opportunity within it and founded a new company, NeXT, which was later acquired by Apple. Jobs used his failure as a stepping stone to come back to Apple and to enhance its growth.

There may be wonderful opportunities lying beyond the horizon and only those who keep the faith can visualize them. Failures are the stepping stones to success and we can turn our failures into a pathway to success if we set our mind to do so.

Am I A Failure?

You may be wondering how the title "Am I A Failure" relates to you if you are a person...
Power-up

"Early bird catches the worm" is probably a favorite quote of aspirants, and one disliked by procrastinators. It's always...
Power-up

Rejection is probably one of life's worst experiences. It can feel like a slap in the face, rendering you...