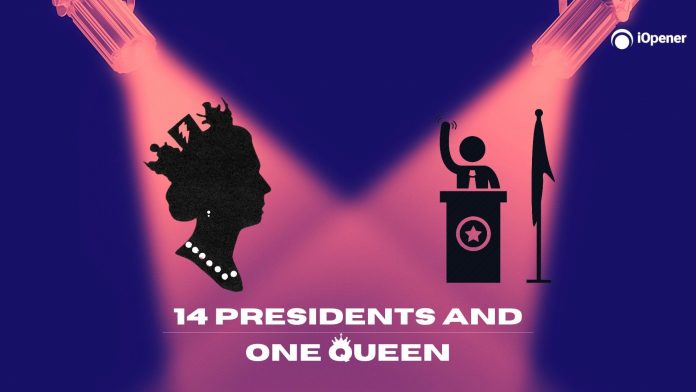 14 Presidents and The Queen

USA has seen 14 Presidents since Queen Elizabeth II was proclaimed the Queen in 1952. The Queen has met 12 out of the 14 Presidents. If we look back into history, it was on February 8th, 1952 that Elizabeth II was formally proclaimed Queen in St. James’s Palace at a meeting of the Accession Council to which all members of the Privy Council were invited. It was Harry S. Truman who was the President of USA at that time.

“My entire life, whether it be long or short, shall be devoted to your service and to the service of the great imperial family – to which we all belong” were the words of Queen Elizabeth II during her proclamation.

It may come as a surprise to many reading this that Elizabeth II wasn’t exactly in line to be the Queen of England. Her father, King George VI was never supposed to be King in the first place. It was David (King Edward VIII), George’s brother who was the eldest son, so as custom dictates, he was supposed to be King. David did become King, and was crowned, but he abdicated the throne to go through with a marriage that the political and religious authorities within Britain did not approve of.

Queen Elizabeth II was proclaimed as the Queen after the death of her father King George VI, who had reluctantly taken up the Crown and its responsibilities.

It was in the year 2017 that the world’s longest-reigning sovereign, Queen Elizabeth II, reached the Sapphire Jubilee of 65 years on the throne. On 9th September, 2015, she also surpassed her great-grandmother, Queen Victoria, to become the longest-living British monarch. Former British Prime Minister David Cameron said that her rule has been “a golden thread running through three post-war generations”