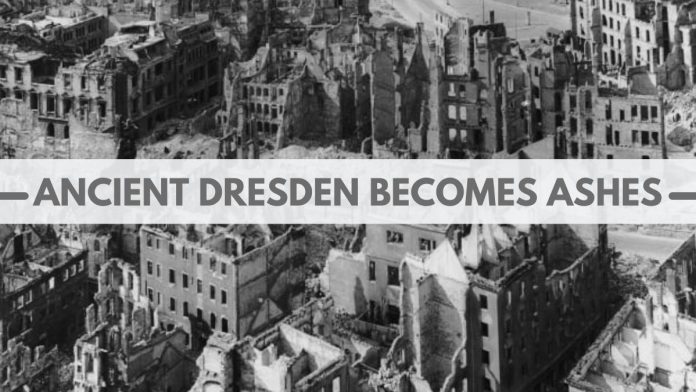 On the night of February 13, 1945, the American prisoners-of-war held in the German city of Dresden heard the city’s fire siren right above their heads. Their German guards moved them two storeys down into a meat locker underground. Hours later, when they came back to the surface, the city was unrecognisable. “The city was gone,” said a renowned writer and a social critic Kurt Vonnegut – one of the American POWs who witnessed the bombing of Dresden.

Three air raids were conducted on Dresden by the British-American air forces on the nights of 13th and 14th. 3900 high explosive bombs and incendiary devices were dropped all over this beautiful city which held a rich historic and architectural heritage. As a result of the aerial bombing, it was left in complete ruin. The resulting firestorm burnt down more than 1600 acres of the city centre and took around 25000 lives within a single day. Margaret Freyer, a survivor, recalls her horrific experience of those nights: “Insane fear grips me and from then on I repeat one simple sentence to myself continuously: I don’t want to burn to death. I do not know how many people I fell over. I knew only one thing: that I must not burn.”

This attack tactically gave an upper hand to the Allied forces of USA & UK towards the end of World War II; within 3 months of this, Adolf Hitler committed suicide in his underground bunker, after which the German High Command signed the unconditional surrender of all German forces. Frederick Taylor, describing the bombing, writes, “The destruction of Dresden has an epically tragic quality to it.”