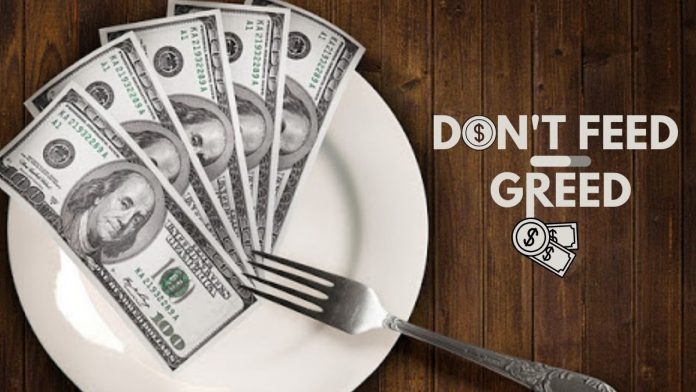 Greed usually arises out of an inability to distinguish between our needs, and our wants. Slowly, everything we want ends up being perceived as a need. Such perceived needs get pent up within us, until we get drawn into a vicious circle of unhappiness and exhaustion. As they say, ships don’t sink because of the water around them, but because of the water that gets into them. This image illustrates why it’s crucial not to allow such debilitating greed into our system.

Jesus once narrated a parable of a man who accumulated a lot of possessions but gave no thought to what the God-intended purpose for those possessions. He had big plans for his own future. One night, after he had just made some big profits, he thought to himself that he would tear down his existing properties and build bigger ones. But God said to him, “You fool! This very night your life will be required of you. Then who will own what you have accumulated?” He had made accumulating more and more the driving motivation of his life, without once questioning what the purpose of it all.

We have been given two hands, one to receive with and one to share. We hold all the blessings and riches we have received not as owners, but as stewards, so that they can be used to satisfy our needs, as well as to share with those around us who are less fortunate. Because at the end of the day, the abundance of the possessions we have managed to accumulate will not be the ultimate measure of a life well lived. True happiness and love will abound to those who realize that it is more blessed to give than to receive.Don’t Feed greed.

Studies show that if a person has faced rejection or disparaging situations in childhood or adolescence, they are likely...
Power-up

Life is often likened to a journey where one walks through valleys and mountains of various experiences. Some of...