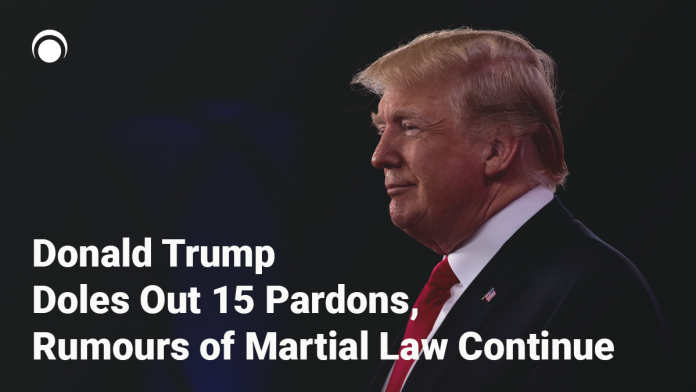 US President Donald Trump granted pardons to 15 people, while also commuting the sentences of 5 others as he enters the final month of his tumultuous presidency. The embattled President has been issuing pardons to allies, friends, and political supporters and the latest includes a pair of congressional Republicans who were strong and early supporters, a 2016 campaign official ensnared in the Russia probe and former government contractors convicted in a 2007 massacre in Baghdad.

There are also murmurs of a possible immunity being granted to Saudi Prince Mohammad Bin Salman from prosecution in the murder of Washington Post columnist Jamal Khashoggi.

Trump’s actions in his final weeks in office have increasingly made for outrageous headlines and increased concerns in the US government apparatus, who genuinely fear what he could possibly do next. His continued refusal to acknowledge the results of the US elections, commit to a peaceful transition of power, and continued indulgence in outlandish conspiracy theories make for a tense transition of power over the course of the next few days.

Some of his staunchest advisers have openly suggested him invoking martial law to overturn the US election and continue to remain in power, even as officials from the Pentagon remain tight lipped over the possible ramifications of such a move.

The latest round of pardons drew sharp criticism from top Democrats, including Rep. Adam Schiff, the chairman of the House Permanent Select Committee on Intelligence. Rep Schiff called it an abuse of power.

“Trump is doling out pardons, not on the basis of repentance, restitution or the interests of justice, but to reward his friends and political allies, to protect those who lie to cover up for him, to shelter those guilty of killing civilians, and to undermine an investigation that uncovered massive wrongdoing,” called out Congressman Schiff, as reported by the Associated Press.

Last month, Trump pardoned former national security adviser Michael Flynn, who had twice pleaded guilty to lying to the FBI, and months earlier commuted the sentence of another associate, Roger Stone, days before he was to report to prison.