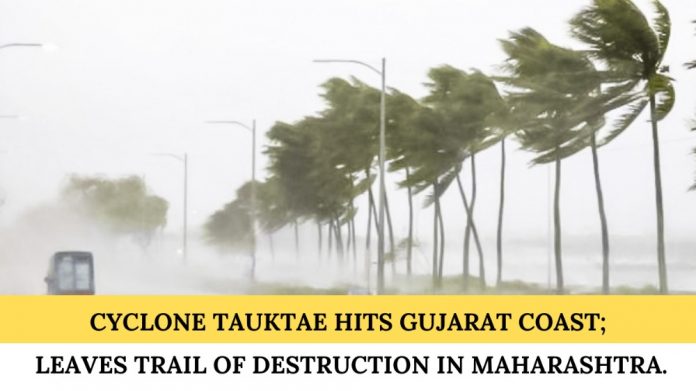 On Monday night, the cyclonic storm Tauktae, gusting up to 185 km per hour began making landfall on the Gujarat coast after the heavy rains in Mumbai. Due to the Cyclone, over 1.5 lakh people were evacuated in Gujarat. However, two barges with 410 people on board went adrift in the Arabian Sea. The India Meteorological Department (IMD) said that the tropical storm ‘Tauktae’ (pronounced as Tau’Te) which had intensified into a very severe cyclonic storm, lies close to the Gujarat coast.

Six persons were killed in Maharashtra’s Konkan region in incidents related to the severe cyclonic storm while three sailors remained missing after two boats sank in the sea. Three persons died in Raigad district, a sailor in Sindhudurg district and two persons were killed in Navi Mumbai and Ulhasnagar in Thane district after trees fell on them. Two boats with seven sailors on board, anchored in the Anandwadi harbour in Sindhudurg district capsized. 54 teams of the NDRF and SDRF remained deployed.

Because of the cyclone, Chhatrapati Shivaji Maharaj International Airport earlier announced the suspension of operations from 11 am to 2 pm and later decided to keep all operations shut till 8 pm on Monday.

Gujarat Chief Minister Vijay Rupani said that the Prime Minister Narendra Modi and Home Minister Amit Shah are in touch with the state government and have extended all possible help.

As Mumbai continued the heavy rains, over 12,000 citizens were relocated to safer places from the coastal areas. The Indian Coast Guard said that it rescued 12 fishermen stranded around 35 nautical miles off the Kochi coast amid rough seas due to the cyclone on the night of May 16.

A senior official of the BMC said that the Bandra-Worli sea-link was closed for traffic due to cyclone and people were asked to take alternate routes.

On Monday, Indian authorities shut ports and major airports as the most powerful cyclone in more than two decades roared up the west coast in Gujarat. “This will be the most severe cyclone to hit Gujarat in at least 20 years. This can be compared with the 1998 cyclone that hit Kandla and inflicted heavy damage,” the state revenue secretary Pankaj Kumar told Reuters.

Electricity pylons and trees were uprooted and buildings damaged in coastal areas of Gujarat.

The cyclone piles pressure on Indian authorities already struggling with a high caseload of COVID-19 infections. “This cyclone is a terrible double blow for millions of people in India whose families have been struck down by record COVID infections and deaths. Many families are barely staying afloat,” said Udaya Regmi, South Asia head of Delegation, International Federation of Red Cross.

Gujarat chief minister Vijay Rupani said that all measures were being taken to deal with the situation. “These are special circumstances. The administration is busy with the COVID-19 challenges, and is now gearing up to deal with the impact of the cyclone,” said Rupani. Gujarat and Mumbai both suspended their vaccination drives on Monday due to the cyclone.

India’s largest private port at Mundra suspended operations for the day. Authorities also informed about the state’s Asiatic lions, an endangered species found only in the Saurashtra region of Gujarat where the cyclone is expected to inflict most damage. “There are around 40 lions in some patches in coastal Saurashtra, and we are monitoring them. Some lions have already moved to higher grounds. We are keeping fingers crossed, and praying the lions will be safe,” Shyamal Tikadar, Principal Chief Conservator of Forests in Gujarat, told Reuters.