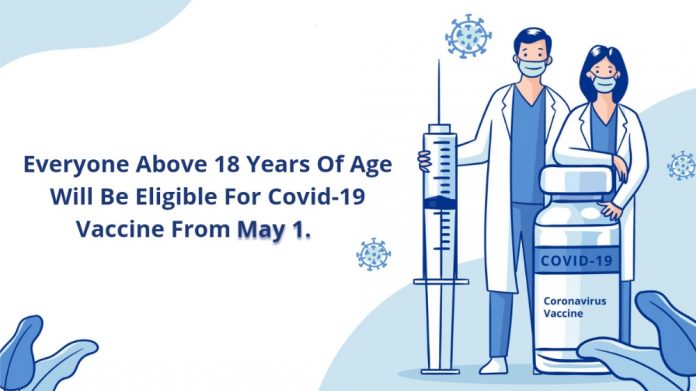 The government has expanded the vaccination drive against the coronavirus for everyone above the age of 18 years from May 1, 2021.

“All adults will be able to take the shots as part of the liberalised and accelerated phase 3 strategy of COVID-19 vaccination”, the Centre said as per the new guidelines. The Union Health Ministry added that the above decision was taken in a meeting chaired by Prime Minister Narendra Modi.

The decision came as India’s total tally of COVID-19 cases crossed 1.50 crore with a record single-day rise of 2,73,810 new infections. According to the Union Health Ministry data updated on Monday, the country’s total active cases have now surpassed the 19-lakh mark.

Various other decisions regarding flexible pricing, procurement, eligibility and administrations of vaccines during the third phase of the inoculation drive were taken during the meeting.

Prime Minister Narendra Modi said that the government is working hard to get a maximum number of Indians to be vaccinated.

“The government has been working hard from over a year to ensure that maximum numbers of Indians are able to get the vaccine in the shortest possible of time. India is vaccinating people at world record pace and we will continue this with even greater momentum,” the PM stated.

The states, private hospitals and industrial establishments will be able to procure the doses directly from manufacturers. Under the third phase of the vaccination drive which is starting from next month, the vaccine manufacturers would supply 50 per cent of their monthly Central Drugs Laboratory (CDL) released doses to the central government and would be free to supply the remaining 50 per cent doses to state governments and in the open market.

Before May 1, the manufacturers were required to make an advance declaration of the price for 50 per cent supply that would be available to the state governments and in the open market. The private vaccination providers would need to transparently declare their self-set vaccination price and the eligibility would be opened up to all adults, that is everyone above the age of 18.

Vaccination will continue as before in the government of India vaccination centers – free of cost – for the eligible population who are healthcare and frontline workers and all people above 45 years of age.

The Union Health Ministry on Monday added that Maharashtra, Uttar Pradesh, Delhi and Rajasthan are among the 10 states that account for 78.58 per cent of the new Covid-19 cases reported in a day. The other states in the list of 10 are Tamil Nadu, Karnataka, Gujarat, Kerala, Madhya Pradesh and Chhattisgarh.

ICMR Director General Dr. Balram Bhargava said while the requirement of oxygen was found to be more in the second wave of coronavirus, the severity of symptoms is very less this time.

“If you see the symptoms, severity is very less this time. In this wave, we have witnessed more cases of breathlessness while in the last wave, symptoms like dry cough, joint pain, headaches were more. Higher requirement of oxygen was found in this wave. There is no difference in the percent of death between the first wave and second wave from the data we have,” Dr Bhargava added.