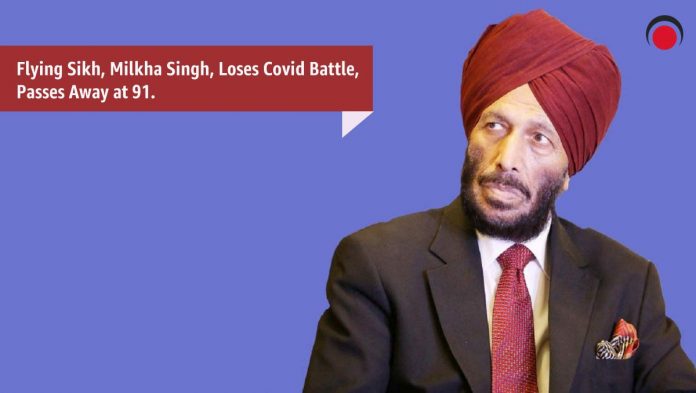 Legendary Indian sprinter Milka Singh lost his battle against the corona virus infection and succumbed to covid-19 late in the night yesterday at Chandigarh’s PGIMER hospital. In a statement issued by the family, the sprinter nicknamed, the Flying Sikh breathed his last at 11.30pm on 18th June 2021 and is survived by his son and three daughters.

“He fought hard but God has his ways, and it was perhaps true love and companionship that both our mother Nirmal ji and now Dad have passed away in a matter of 5 days,” the statement from the family added.

Further explaining the events leading up to the death of the legendary sprinter, the statement added that his condition turned critical last evening as he developed complications, including fever and dipping oxygen saturation levels. He had been in the Intensive Care Unit of the PGIMER hospital for a month battling the dreaded virus

“We are deeply indebted to the doctors at PGI for their valiant efforts and the love and prayers we received from across the world and from yourselves,” the family said.

As indicated in the family statement, his death comes five days after the demise of his wife, also due to covid complications.

Leading the tributes for the legend, PM Narendra Modi called him an inspiring personality and said that he had a special place in the hearts of millions around the world.

“In the passing away of Shri Milkha Singh Ji, we have lost a colossal sportsperson, who captured the nation’s imagination and had a special place in the hearts of countless Indians. His inspiring personality endeared himself to millions. Anguished by his passing away,” PM Modi tweeted.

“I had spoken to Shri Milkha Singh Ji just a few days ago. Little did I know that it would be our last conversation. Several budding athletes will derive strength from his life journey. My condolences to his family and many admirers all over the world,” he added in another tweet.

Narrowly missing out on an Olympic medal at the Rome Olympics of 1960, Milkha Singh held the national record for 400m sprint for almost 40 years. He won 4 Asian Games Golds and a Commonwealth Gold at Cardiff in 1958 – in his glittering and inspiring career.

He was conferred with Indian’s fourth-highest civilian award – the Padma Shree and was 91-years old.