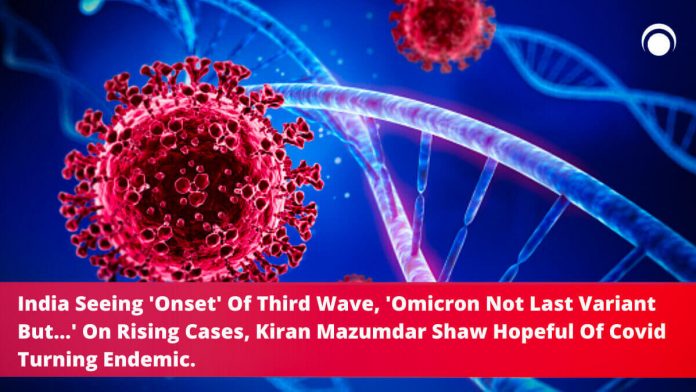 India is seeing a huge surge of Covid cases in the country, which is considered to be triggered by the new Omicron variant. On Monday, Delhi recorded 3,194 fresh infections, which is the highest daily case since May 20, when India was in the middle of the deadly second wave. Mumbai reported 8,063 fresh cases, recording a 27% jump from Saturday when the city registered 6,347 fresh infections.

With the recent rise of cases in metro cities and some states, experts are suggesting that the country could be seeing the onset of a third wave.

Most of the new infections in Delhi and Mumbai are asymptomatic, indicating the recent surge is driven by Omicron. According to BMC data, about 89% of the cases in Mumbai are asymptomatic. Delhi on the other hand has recorded more coronavirus cases in the first two days of January than recorded between August and November, as per official data. Delhi Health Minister Satyendar Jain said that 84 percent of total Covid-19 cases in the national capital are now of the Omicron variant and the positivity rate in the city had reached 6%.

With the rising cases, revenue minister R Ashoka said that it is almost certain that a third wave of Covid-19 wave is inescapable. “With the rising cases of Covid-19 it is becoming more and more evident that a third wave of Covid-19 is inescapable. We will soon impose more stringent restrictions in the state and urge people to cooperate with the government failing which a Lockdown will be inevitable,” he stated.

Karnataka on Sunday logged 1,187 Covid cases, with a total number of active cases in the state is 10,292, of which 8,671 are in the Bengaluru Urban district alone. Meanwhile in West Bengal, the daily cases reached 6,153 while Kolkata’s positivity rate is at 33%.

Talking about the new variant-Omicron spread, Shaw added that the Omicron variant is surging fast but it also descends quickly. “We need to brace ourselves for many variants, Omicron is not the last, we believe hospitals are more prepared this time and we are veering towards an Endemic situation. Delta also should not be a huge worry, we know how to deal with it now. It is important that we need to look at vaccinating children sooner or later. So, we need to speed up pediatric trials as soon as possible and start taking rolling reviews on the vaccination trials for children below the age of 15. I also believe that we need to ramp up our genomic sequencing, which I think needs to be opened up to the private sector as well,” Shaw said.