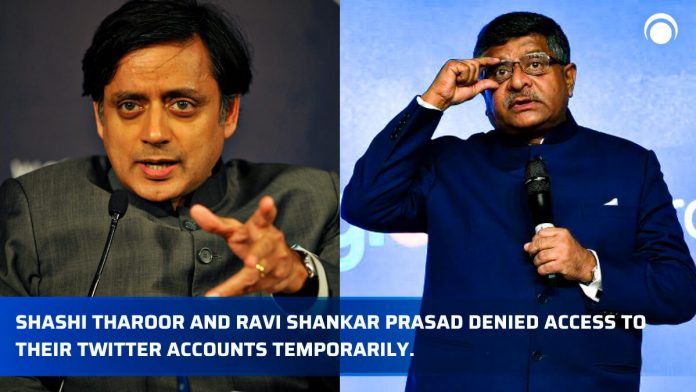 Prominent Indian politicians ran into a bit of a tweet-trouble on Friday as Minister for Electronics & Information Technology Ravi Shankar Prasad and Congress MP from Thiruvananthapuram Shashi Tharoor both finding themselves locked out of their twitter accounts – albeit for different reasons.

“In this case, the complainant was the International Federation of the Phonographic Industry (@IFPI_org) which is zealously defending the rights of @sonymusic to “Rasputin”. Ironically, at their last conference in India, I was a keynote speaker! #SMH,” he tweeted adding that he “didn’t blame Twitter for the action or attribute the motives to them that @rsprasad (Ravi Shankar Prasad) does, though it wasn’t pleasant finding my account locked. Clearly they had no choice but to honour a DMCA takedown notice, however stupid & pointless the request was.”

Tharoor also added that as the Chairman of the Parliamentary Standing Committee on Information Technology, he will seek an explanation from Twitter for their action against his and Prasad’s accounts.

In the past few months, the microblogging site and the government have been in disagreements over multiple instances, including during the farmers’ protest and also when the platform tagged political posts of several leaders of the ruling party BJP as “manipulated media”, giving rise to a sharp reproach from the Centre.

Meanwhile, Tharoor’s panel had last week called out Twitter officials over issues related to misuse of the platform and protection of citizens’ rights.