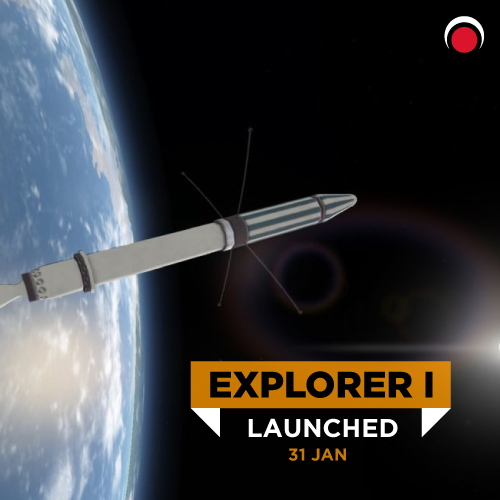 The Soviet Union had launched a Satellite to the space, Sputnik I in the year 1957. It was the days of the ‘cold war’ between the giants the US & the USSR. A project was approved by the US Army Ballistic Missile Agency under the supervision & direction of Dr. Wernher Von Braun. The project was to launch a satellite in the fastest time possible by using their Jupiter C rocket.

This project was awarded to JPL (Jet Propulsion Laboratory) to design, build & operate the satellite which would server as rocket’s payload. JPL took the challenge and built a approximately 14 kg satellite within 3 months. The primary instrument on this satellite was was a cosmic ray detector to measure the radiation environment on earth orbit.

Explorer I was launched on the earths orbit on this day in 1958, which was made to do a looping orbit. Each orbit took 114.8 minutes which translates to 12.54 orbits per day. The satellite itself was about 80 inches long with 6.25 inches in diameter.

The US managed to send four explorers in the year 1958, out of which 2 were successfully launched into the orbit. Explorer I successfully launched onto the orbit, and kept transmitting the data for about 5 months until its battery ran out in May 23rd 1958. The satellite came back to the earths atmosphere & burned up on March 31st, 1970 after completing approximately 58000 orbits.