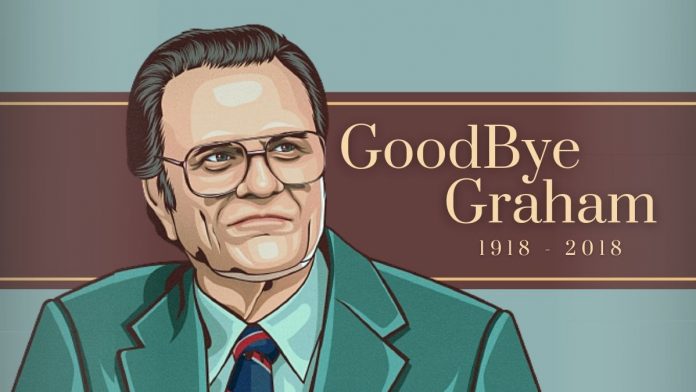 “My home is in Heaven. I’m just traveling through this world.”

Four years back, on this day “America’s Pastor,” Reverend Billy Graham died at the age of 99.

The renowned Christian evangelist, Graham, ministered for six decades across the United States and the entire globe at his “crusades” and prayed with or gave counsel to every U.S. president since Harry Truman in 1950.

Billy Graham was born as the son of a dairy farmer in 1918. He was a country boy who loved baseball and “detested going to church.” But it was at age 15, in one of the revival meetings by a traveling evangelist, he accepted the Lord.

Graham recalled, “One night, when the invitation was given to accept Jesus, I just said, ‘Lord, I’m going.’ I knew I was headed in a new direction.”

The new direction led him to go to college at the Florida Bible Institute and then to Wheaton College, where he met his future wife, Ruth Bell. He and Ruth were married in 1943 and two remained together for 64 years until she passed away in 2007. They had five children, as well as numerous grandchildren and great grandchildren.

Billy Graham initially wanted to be an army chaplain but a disease stood as barrier for him to serve in the army. He toured United States and Europe with an organization called, Youth for Christ and later started his own in Christian evangelism in which he preached a simple message of Christianity to millions of people over the course of the next six decades.

He was diagnosed with Parkinson’s disease in 1989, and his health slowly digressed in the years that followed. He founded the Billy Graham Evangelistic Association in 1950 and continued to run it until giving the reigns to his son, Rev. Franklin Graham, before he retired in 2005 to his home in North Carolina. Billy Graham gave his final sermon — a short film titled My Hope America — in 2013 at the age of 95.

“Throughout his life, Billy Graham preached the gospel of Jesus Christ to some 215 million people who attended one of his more than 400 Crusades, simulcasts and evangelistic rallies in more than 185 countries and territories. He reached millions more through TV, video, film, the internet and 34 books,” reads Graham’s official obituary, which briefly chronicles his life and work over multiple decades.

https://youtu.be/8m8M6YQArBc “I have a dream that my four little children will one day live in a nation where they will...
Pearls

We are not cistern made for hoarding, we are channels made for sharing. - Billy Graham