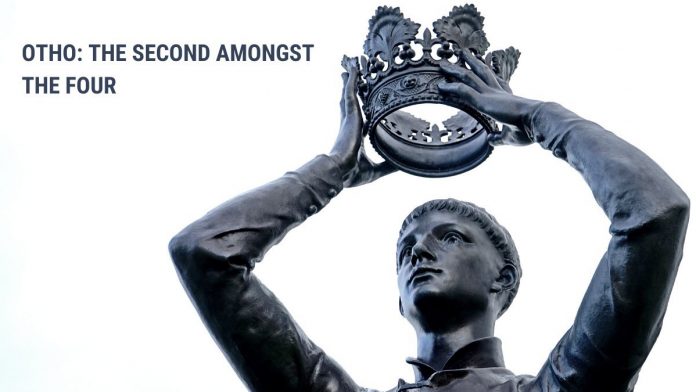 Otho: The Second amongst the Four

A.D. 69 – a year that remains etched in Roman history, because this was a year during which the Roman empire had three emperors selected by the Senate. The transition from the Julio – Claudian dynasty to the Flavian dynasty within the mighty empire witnessed four emperors within a period of 12 months spanning from June in A.D. 68 to June in A.D. 69.

There was a revolt started by the Germanian & Britain Governors in AD 65 against the heavy taxation and ruthless capital punishments imposed by Nero. As this revolt progressed, it was in the year 68 A.D. that Nero discovered that he was tried in absentia with the most likely result of being condemned to death. During this time, the Pretorian Guard prefect Nymphidius Sabinus steered his men to transfer their loyalty from Nero to Galba (Governor of Hispania). These events led to Nero committing suicide, the first Roman Emperor to do so. Galba was subsequently appointed by the Senate to be the Emperor of Rome.

Galba didn’t retain favour for long in the eyes of the Senate and other governors. The Germanian legions refused to swear allegiance to him, causing him to panic and attempt to gain more control over the Senate by selecting some new senators, a move which offended the then powerful senator Marcus Salvius Otho. Otho was a wealthy man who desired honour for himself and was quite influential within the Senate.

Otho bribed the Pretorian Guard who were already disillusioned with Galba. This led Galba into the radical step of going to the streets to stabilise the situation. Over the next two weeks, many events – from Galba losing control over the Rhine legions to a coup d’ètat – took place, which eventually led to Galba being murdered by the Pretorian Guard in the Roman Forum.

Otho was recognised by the Senate as the next Emperor on the same day, January 15th, AD 69. Otho, though ambitious and greedy, did not display any tyrannical tendencies, which led the Senate to believe that the new emperor would be fair. This expectation was short-lived – precisely for three months – and history records that Otho was removed and Vitellius, the next emperor, took over in the month of April, A.D. 69.