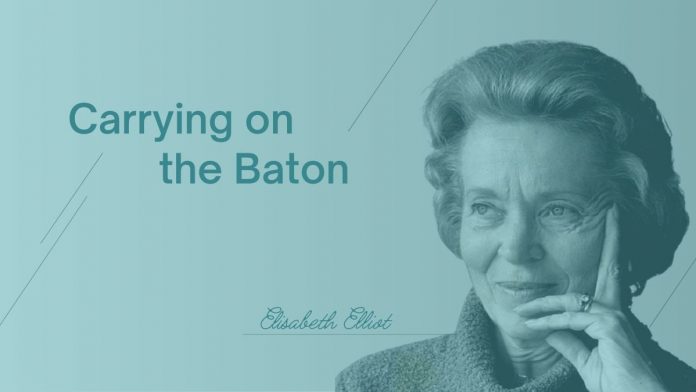 Carrying on the Baton – Elisabeth Elliot

But there is this amazing lady we find within the pages of history called Elizabeth Elliot, who boldly went out with the message of the love of Jesus to the very people who killed her husband. In 1956, her husband Jim Elliot was speared to death along with four of his friends, while trying to make contact with the people of Huaorani –a tribe of eastern Ecuador. He was just 28, and their daughter Valerie was just ten months old when her father was killed.

Instead of seething in anger, grief or bitterness, Elizabeth Elliot went to live with the people of Huaorani, learned Huao, their language, and continued proclaiming God’s love to them for another seven years. It takes real courage and much of God’s grace to make such a remarkable choice. The price she had to pay in order to carry on the baton that her husband passed on to her was huge. But she managed to do it, propelled by the love of God that she so richly experienced in her own life.

Marriage can be technically defined as a contract between two individuals who agree to be united legally, economically, and...
Pearls

Be kind and compassionate to one another, forgiving each other, just as in Christ God forgave you.- Bible
Power-up

Forgive yourself, but don’t forget the lessons!

In the heat of an argument with a loved, we sometimes end up saying things we shouldn’t have, only...