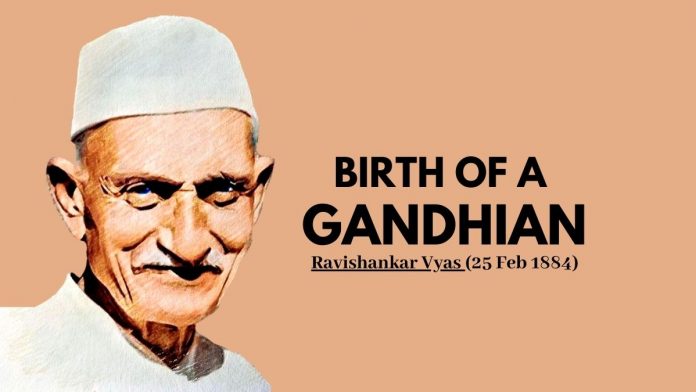 The Birth of a Gandhian

A name not so familiar to many but a true Gandhian, Ravishankar Vyas was born to a Brahmin family in Kheda Gujarat on this day in 1884. A sixth class drop out, and predominantly from an agrarian background , Ravishankar Vyas also known as Ravishankar Maharaj was an Indian Independence activist & a social worker.

The Arya Samaj philosophy had influenced him a lot. It was during this time that he met Gandhi in 1915, and then Sardar Vallabhai Patel. Eventually he became a close associate and one of the key pivotals in the freedom movement.

Borsad Satyagraha, Bardoli Satyagraha, the Dandi March, the Quit India Movement are some of the main events where Ravishankar Maharaj was part of organising team and he actively participated in them as well. These had also led him to be in prison multiple times and in some cases few years.

His social work was mainly towards the rehabilitation of Patanvadiya & Baraiya castes, along which he founded a school called ‘Rashtriya Shaala’ before the independence. After the independence he had been active for the social causes, with Bhoodan and Sarvodaya movement. He is known to have travelled 6000 kms in three years for these movements.

Until his death in 1984, the top officials of the state would seek his blessings as well after their election.