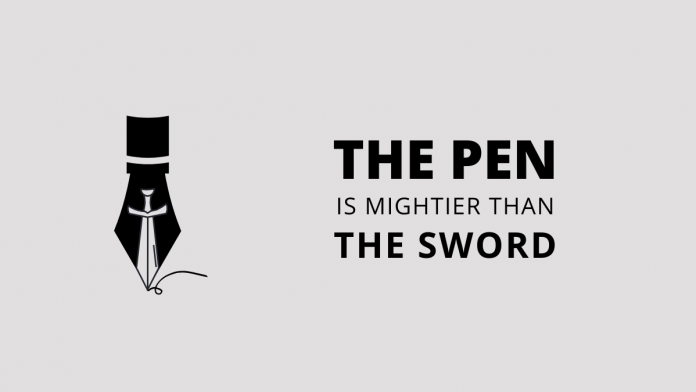 The Pen is Mightier than the Sword

History would be greatly impoverished without the men and women who took up their quills and ink instead of weapons, be it Lee Hyeon-seo, who wrote of the oppressive rule in North Korea, or Immaculee Ilibagiza, who wrote of discovering God amidst the Rwandan holocaust. If these people would have taken up arms in the face of atrocities they would have been put down and their voice suppressed by the brute force of these very arms. Instead, they chose to take up their pens and begin writing about the horrific experiences they encountered for the world and posterity to see, thus gaining a place in history.

If Napoleon Bonaparte or Alexander the Great fought with swords and conquered kingdoms, the men and women who took up a pen and fought with words have conquered the hearts of people. Unravelling legacies of suffering, love, and hope, these heroic ones refused to cower before people in power or before unjust conventions. Their stories display true courage, loyalty, justice, humanity, and passion, that become etched in the minds of their readers. ‘The Hiding Place’ is one such triumphant life story of Corrie Ten Boom, who aided and hid Jews during the Holocaust, compelled by her unshakeable Christian values. She once famously said, “In darkness, God’s truth shines most clear.” Here was a woman who suffered under the tyranny of an evil dictatorship, yet understood that the darkness she was in enabled her to see the light of God shining ever so brightly. The stories she penned down continue to encourage and inspire many to stand up for the truth.

While the sword represents short-lived dominance and control, the pen celebrates deep and enduring transformations. Though change that is pursued in this manner may take a painstakingly long time, the echoes that writing produces may eventually resonate across generations.