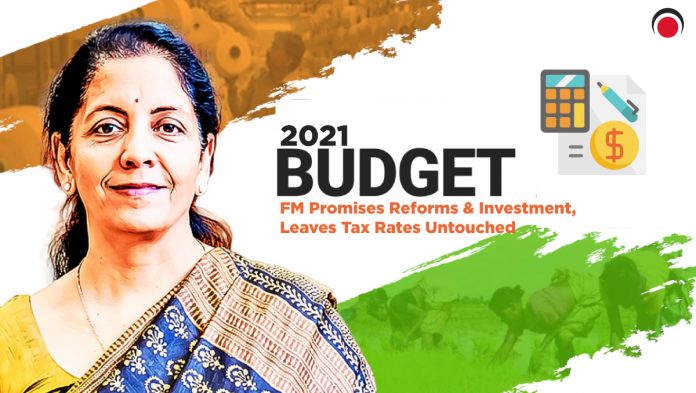 Finance Minister Nirmala Sitaraman presented the Union Budget for FY 2021-22 on the floor of the Lok Sabha earlier today and termed it the first digital budget. Jettisoning the traditional brown briefcase & ‘bahi khata’ for a Made in India tablet, there were plenty of symbolism on offer and of course plenty of substance for the nation to ponder over as the government outlined its fiscal expenditure priorities for the year to come.

This budget is unique, in the sense that it is only the third time in the history of independent India that a budget has been presented in a contracting economy. And thus, the finance minister had her task cut out to stimulate the economy and provide a fresh impetus to jobs in the coming fiscal year, even as the country and the world at large returns to normalcy following the corona virus pandemic.

“Faith is the bird that feels the light when the dawn is still dark,” this quote from Rabindranath Tagore headlined the Finance Minister’s speech as she sought to underscore the enormity of the task ahead for the government.
Within the context of the current situation, health & well-being was the first of the six pillars of the budget 2021, as outlined by the FM, physical and financial capital and infrastructure, inclusive development, human capital, innovation, and research & development (R&D), and minimum government & maximum governance being the others.

The outlay for healthcare in the next six fiscal years will total Rs. 64,180 crores to strengthen the primary, secondary, and tertiary sectors. Integrated Public Health laboratories and critical health care centres will also be established, while a total of Rs. 35,000 crores will be put aside for the corona virus vaccination program. All put together, the Union Health Ministry will have an outlay of Rs 2.23 Lakh crores, a 137% increase as per budgetary estimates.

Education will be another sector that will see major investments from the government with the setting up of the Higher Education Commission. 15,000 schools will be strengthened under the National Education Policy, 100 new Sainik Schools will be set up and there is a proposal to set up a central university in Ladakh.

Manufacturing and agricultural sectors also received attention from the Finance Minister in her speech, while infrastructure development will get a further push in the coming fiscal, she said. Highways expansions and metro rail projects will be escalated in certain poll-bound states, with Chennai metro being provided 63,000 crores.

On the taxation front, there were no changes in the overall rates or slabs, although some exemptions earlier provided, such as that for affordable housing, will continue into the next financial year. The FM sought to make lefe easier for the senior citizens by abolishing the need for filing taxes for those above 75 years. The income tax form has been further simplified to improve compliance and the government refrained from adding any Covid cess. Further reforms of the income tax sector include the setting up of a faceless and digital IT Appellate Tribunal.

“Tax audit threshold raised to Rs 10,000 crore for digital transactions. Dividend payment by REITs and InvITs not subject to TDS. Advance tax liability to arise only after payment of dividends,” the FM said.

Further giving a boost to the start-up sector, the FM said the government will incentivise the setting up of one-person companies, and capital gains accrued from investment into start-ups will continue to be exempt from taxes for another year.

“For start-ups, we are allowing 1% companies to grow without any restriction on their paid-up capital,” the FM announced.

Keeping up with the digital theme, a digital census will be carried out, as the year 2021 is the year of the census and the government will provide Rs. 3600 crores for the purpose of the same.