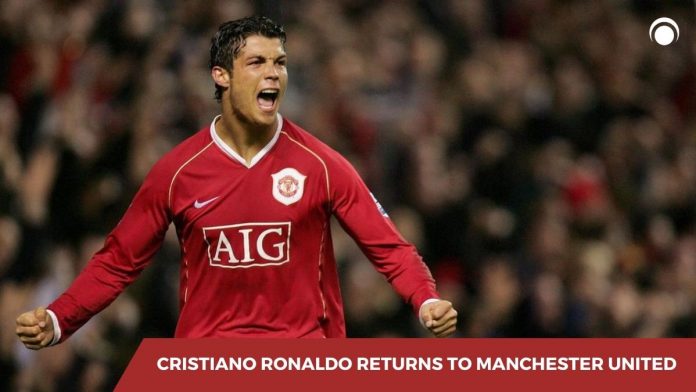 Cristiano Ronaldo is returning to Manchester United as announced by the club on Friday. The 36-year-old Portuguese footballer is planning this return from Juventus after leaving the Premier League club in 2009 as the world’s most expensive player. He will try his one last shot for a sixth Ballon d’Or and Champions League title.

As per ESPN report, the deal is said to be €15 million one with a potential further €8m in add-ons.

Ronaldo will again play at Old Trafford 12 years after leaving United to join Real Madrid in 2009, where he remained until joining Juventus in 2018.

Manchester United posted a collage of Ronaldo from his previous playing days at the club on its page along with the words: “Welcome home, @Cristiano.”

As per a statement from Manchester United, “Manchester United is delighted to confirm that the club has reached agreement with Juventus for the transfer of Cristiano Ronaldo, subject to agreement of personal terms, visa and medical. Cristiano, a five-time Ballon d’Or winner, has so far won over 30 major trophies during his career, including five Champions League titles, four FIFA Club World Cup, seven league titles in England, Spain and Italy, and the European Championship for his native Portugal. In his first spell for Manchester United, he scored 118 goals in 292 games. Everyone at the club looks forward to welcoming Cristiano back to Manchester.”

Meanwhile, Ronaldo soon took to Instagram, saying he gave his “heart and soul for Juventus.”

“I’ll always love the city of Turin until my final days,” he wrote. He was the top scorer in Serie A for the last two seasons and scored 101 goals in 134 appearances.

“In the end,” Ronaldo said, “we can all look back and realize that we achieved great things, not all that we wanted, but still, we wrote a pretty beautiful story together.”

According to reports in various media outlets, it reportedly took a combination of calls and messages from Sir Alex Ferguson, Bruno Fernandes and ex-Manchester United players to convince Ronaldo to return to United. Once that happened, it was only a matter of time before the five times Ballon d’Or winner made up his mind to return to Old Trafford.

While the rumours had started weeks ago, Juventus manager Massimiliano Allegri confirmed on Thursday that Ronaldo had asked to leave the club immediately. Leading European publications had confirmed that the Ronaldo to Manchester City gossip was well on its way to being true. Until news of the same triggered Manchester United’s interest and resulted in an action packed transfer day.

The separation of Ronaldo and Juventus is mutual. With one year remaining on his contract, Ronaldo was looking for his next big deal. Just a week ago, Ronaldo had put out a long post on his Instagram asking for people to respect his situation and not to speculate. The post was in response to stories that alleged that Real Madrid didn’t consider resigning their greatest goalscorer.

For Juventus, it is getting rid of a superstar they were never really geared to fully accommodate. Jose Mourinho, who worked with his countryman at Real Madrid said that Juventus had bought a nuclear bomb that they had no idea how to use.

Ronaldo arrived at United as an 18-year-old from Sporting Lisbon in 2003 with a bag of tricks. In six years under the training of Alex Ferguson, his physique and end product were transformed to lead United to three Premier League titles and Ferguson’s final Champions League in 2008.

However, even United could not resist Ronaldo’s desire to move to Spain when Real Madrid offered a then world record 80 million pounds (110 million dollars) in 2009. Real were more than rewarded with nine years of Ronaldo in his prime.

His Portugal team-mate Bruno Fernandes, the man who is the closest to emulating Ronaldo’s world-class talent since he left 12 years ago, has been the spearhead for United’s rise back to Premier League title contenders. Playing behind Anthony Martial was never going to be ideal for Fernandes, while he has made the best of an ageing situation with Edinson Cavani. Now he has the perfect striker to play ahead of him in Ronaldo.

Ronaldo even at 36 years of age has shown that he is still here to conquer by claiming the Golden Boot at Euro 2020; he is maturing like a fine wine, and has certainly not lost his eye for goal.

Cristiano Ronaldo has become the most prolific goal-scorer in the history of football when he scored against Napoli in...