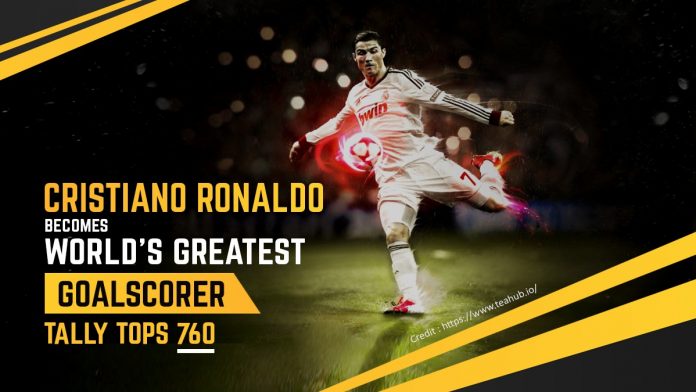 Cristiano Ronaldo has become the most prolific goal-scorer in the history of football when he scored against Napoli in the 64th minute of the Super Cup final match. The Portuguese forward scored the historic goal, playing for his club side Juventus, which helped the team register their ninth Italian Super Cup title by beating Napoli 2-0.

With this goal, Ronaldo has surpassed Austro-Czech Josef Bican’s tally of 759 goals and took his total tally to 760 – for both country and club. Cristiano who turns 36 next month continues to defy his years and remains a goal-scoring machine as always. He is the leading goal-scorer in Serie-A for the current season with 15 goals in 14 games.

After Juventus’ loss against Inter-Milan in last Serie A match and Ronaldo not finding the back of the net, questions were raised as to whether he would be able to maintain his top level performance, however, the Portuguese star has once again quashed all doubts when he scored an important goal in the Super Cup final.

The five-time Ballon d’Or winner recently moved past Brazil legend Pele’s record of 757 goals – who moves down to third on the all-time list – while Romario is fourth with 743 goals and Ronaldo’s Barcelona rival Lionel Messi makes up the top five with 719 goals.

Meanwhile, Cristiano is now just 8 goals away from surpassing Iranian Ali Daei who holds the record of being the all time men’s international top goal-scorer with 109 goals.

Of his 760 official goals, Ronaldo scored an extraordinary 450 for Real Madrid, 118 for Manchester United, 102 for Portugal, 85 goals for Juventus and 5 for Sporting Libson. Ronaldo scored 27 against Sevilla – highest against any club – 25 against Atletico Madrid and he has netted 23 times against Getafe. He has scored 488 goals with his right foot, 139 on his left, 131 with his head and two via other body parts.

Ronaldo remains very optimistic of retaining Portugal’s title at this season’s UEFA European Football Championship. He was a key part of the side that won Euro 2016 – Portugal’s first major trophy. He also scored a hat-trick in the semi-final as Portugal won the inaugural Nations League in 2019. The Portugal forward is confident that in Euro 2020 which has been rearranged for the summer of 2021 due to covid-19 can see Portugal win their third major trophy in five years.

However, winning the World Cup for his country remains the biggest dream for the Portuguese football star he stated that he dreams of leading his country to yet more glory in the next FIFA World Cup which is scheduled to take place in Qatar in the winter of 2022.