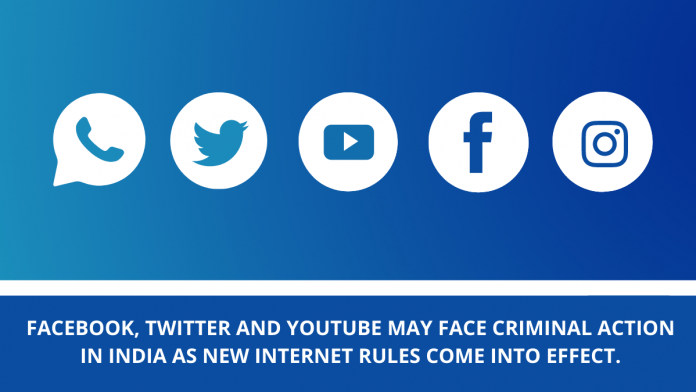 While social media was abuzz with the possibility of social media giants such as – Facebook, Twitter, and WhatsApp – being shut down from May 26th, the more realistic possibility is of these companies attracting punitive action in terms of legal notices and heavy fines. This is because of the fact that these companies, and several others are yet to fully comply with the norms of the new Intermediary Rules jointly introduced by The Ministry of Electronics and Information Technology (MeitY) and Ministry of Information and Broadcasting.

These new rules passed by the government back in February, with special provisions for “significant social media intermediaries” that have more than 50 lakh registered users were to come into effect from Wednesday, 26th May.

The Information Technology (Intermediary Guidelines and Digital Media Ethics Code) Rules 2021 were introduced on 25th February to put restrictions on digital platforms. The rules carried a timeline of three months for significant social media intermediaries that include Facebook, Instagram, Twitter, Twitter, WhatsApp, and YouTube to comply with the special provisions. That timeline closed on Tuesday.

While none of the companies have outrightly declined to comply with the provisions, they have sought more time to be able to do so. For example, Facebook has sought six month, others such as Netflix have known to already complied with the regulations.

The new rules mandates the social media platforms to appoint at least three officers for addressing grievances and follow a specific code of conduct that has been criticized over violating the principles of free speech.

All of these provisions, which are put together under “additional due diligence” in the rules, require social media platforms with more than 50 lakh registered users to appoint a specific chief compliance officer for ensuring compliance with the Information Technology Act, 2000 and the Intermediaries Rules, a nodal contact person to round-the-clock coordinate with law enforcement agencies, and a resident grievance officer to acknowledge grievances within 24 hours and respond them within 15 days. All three of these officers are required to be Indian residents. In addition to the three-officer requirement, the social media platforms are required to have a physical contact address in India and must show the contact details of the appointed officers on their websites and apps.

The rules also require the social media platforms to enable identification of the first originator of messages shared on their platforms. However, this particular part has been criticized by the civil society and entities including the Internet Freedom Foundation (IFF) as it could eventually impact the freedom of expression and privacy and weaken the end-to-end encryption. The government has stated that platforms “shall not be required to disclose the contents of any message or any other information to the first originator.” However, it could demand for the message circulated by the originator and gain access to the content by using the Information Technology Decryption Rules. The new provisions also require social media platforms to have artificial intelligence (AI) driven mechanisms to remove objectionable content.

Meanwhile, some social media platforms requested the government to extend the timeline for the provisions. Industry bodies including Confederation of Indian Industry (CII) and the Federation of Indian Chambers of Commerce & Industry (FICCI) also asked for an extension of one year for the compliance window amid the current pandemic situation. The government, however, has not announced any changes to what it introduced in February.

All said and done, while an outright ban may not materialise, for it is only counterproductive – prosecution and punitive action may become the norm at least in the near term, until the two sides can come to an amicable solution.

India-born Parag Agrawal, has been named the Chief Executive Officer of Twitter. The company's Board has unanimously appointed Twitter's...
General News

The Parliamentary Standing Committee for information and technology will be meeting on Tuesday at 4 pm to discuss the...