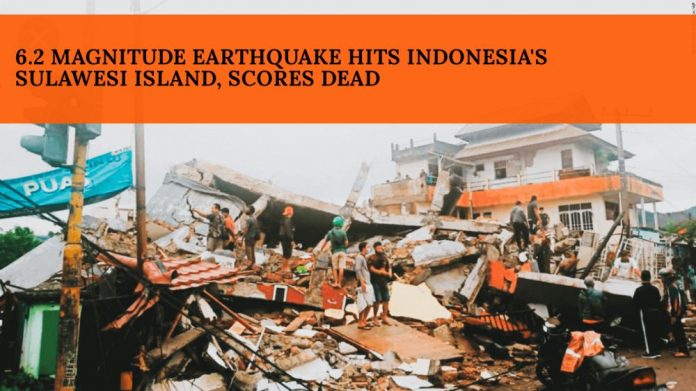 A powerful 6.2 magnitude earthquake shook the Indonesian island of Sulawesi, leaving at least 35 people dead and hundreds of others homeless. The earthquake hit the island in the early hours of Friday, with many still trapped under the rubble. Several aftershocks were also felt in the nearby areas, even as authorities feared the earthquake could trigger a tsunami.

The pre-dawn earthquake caused thousands of citizens on the island to abandon their homes and flee to safety. The epicentre of the quake was 6kms northeast of the town of Majene; it damaged well over 300 homes and other properties in the region. The impact of the quake flattened offices and hospitals, reported Reuters.

The casualty figures are likely to escalate in the hours and days to come as rescue workers continue to pull out bodies from the rubble. And with each passing hour, the possibility of finding survivors continues to diminish.

“More deaths likely to be confirmed as rescue workers fan out,” explained Darno Majid, the chief of the disaster agency in West Sulawesi.

While the magnitude and the impact of the quake suggested that a tsunami might have been triggered, authorities breathed a sigh of relief when their worst fears came untrue.

“Praise be to God, for now OK, but we just felt another aftershock,” said Sukri Efendy, a 26-year-old resident of the area according to Reuters.

While there was no tsunami that was triggered due to the earthquake, the heightened seismic activity resulted in three landslides in the region. This resulted in severe disruption to the power supply, damage to bridges, and hampered the rescue efforts.

Issuing a word of caution, Indonesia’s Meteorology and Geophysics Agency Head Dwikorita Karnawati explained that the possibility of a tsunami hadn’t been completely ruled out as there was a chance of another powerful earthquake hitting the region.

Explaining the quantum of relief work that will be required, the Head of International Federation of Red Cross in Indonesia Jan Gelfand said that the rescue mission was one of the most challenging ones she has overseen.

“This (disaster) was one of our fears and now we are putting all of that planning and protocols into place,” added Gelfand.

Facebook
Twitter
Pinterest
WhatsApp
Linkedin
Email
Print
Telegram
Previous articleCovid Vaccination Kicks-Off in India, All that You Need to Know
Next articleAm I in the right relationship?