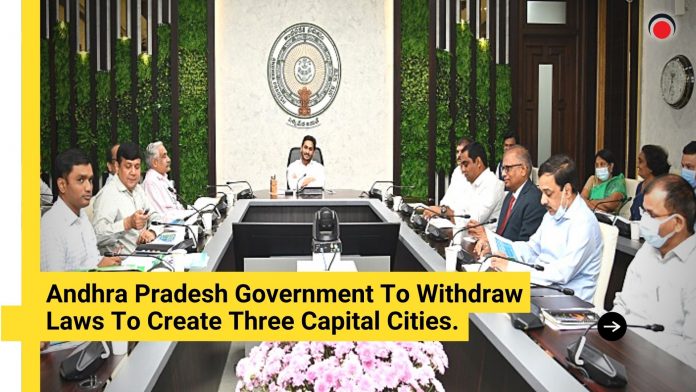 On Monday, the Andhra Pradesh government announced the withdrawal of the legislation for creating three capitals for the state in place of the existing Amaravati after a decision in this regard was taken at the state Cabinet meeting convened by Chief Minister YS Jagan Mohan Reddy.

The Cabinet decided to repeal the two laws passed in June 2020. The Andhra Pradesh Capital Region Development (Repeal) Act was passed to abolish the authority the previous Telugu Desam Party (TDP) government passed in 2015 to develop Amaravati as the state capital. AP Decentralisation and Inclusive Development of All Regions Act was passed for establishing the executive, judicial and legislative capitals at Visakhapatnam, Kurnool, and Amaravati.

In a statement issued in the legislative assembly, Reddy said, “We believed that decentralisation of capital is much needed in Andhra Pradesh…Government is going to take back the Bill which was introduced earlier. We will introduce a new Bill with no errors.”

State advocate general Subrahmanyam Sriram informed the high court about the Cabinet’s decision. He said that CM Jagan Mohan Reddy would make a statement on this in the state assembly. The high court division bench headed by Chief Justice PK Mishra asked the AG to file a detailed affidavit.

A division bench of the court has been hearing a batch of petitions against the decision to form three capitals since November 15. Farmers, who gave up over 34,000 acres of their fertile lands for setting up the capital in Amaravati, challenged the two laws in the court. Over 100 petitions were filed by Andhra Pradesh High Court.

The protesting farmers had also launched a 45-day foot march on November 1 from Amravati to Tirupati, as they demanded the chief minister to repeal the capital trifurcation law. Apart from the farmers of Amravati region, the entire opposition bloc including the erstwhile ruling Telugu Desam Party (TDP), the Congress and the Bharatiya Janata Party (BJP) had objected to the state government’s three-capital plan.