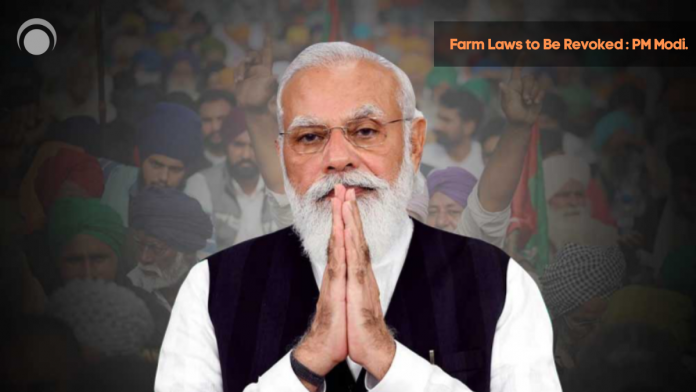 Prime Minister Narendra Modi announced on Friday that the three controversial farm laws will be withdrawn. The move comes on the festival of Guru Purab, when Guru Nanak’s birthday is celebrated, mainly in Punjab. This move came as a surprise for many as the government had not taken any initiative to talk to farmers in recent months.

Thousands of farmers had camped at Delhi’s borders since last November and many died from heat, cold and Covid-19. As farmers celebrate the decision, experts say the upcoming state elections in Punjab and Uttar Pradesh may have forced the decision.

“Our government brought in the new laws with good intention, full sincerity and complete dedication for the welfare of farmers, especially for small farmers, in the interest of agriculture and the country and for the bright future of the poor in villages. But we have not been able to explain to some farmers such a sacred thing which is absolutely pure and for the benefit of the farmers despite our efforts,” PM Modi said in his address.

“While apologizing to the nation, I want to say with a sincere and pure heart that maybe something was lacking in our tapasya (dedication) that we could not explain the truth, as clear as the light of the diya, to some of our farmer brothers. But today is Prakash Parv, not the time to blame anyone. Today, I want to tell the country that we have decided to repeal the three farm laws,” he added.

“In the Parliament session starting at the end of this month, we will complete the process of repealing the three laws,” he said.

“I would request all my protesting farmer friends, today is the auspicious day of Guru Purab, return home to your fields and your families and make a new beginning, let us move forward afresh.”

“Whatever I did was for farmers. What I am doing is for the country.”

Thousands of farmers from Punjab, Haryana, Uttar Pradesh and Rajasthan have been camping outside Delhi since November 2020, demanding that the farm laws be withdrawn.

Rakesh Tikait, a top farmer leader, said the protesters would wait till the laws were repealed in the session starting on November 29.

Meanwhile, the opposition leaders call it the farmers’ victory over the government’s arrogance.

“Farmers’ satyagraha has defeated arrogance. Congratulations for this victory over injustice,” Congress leader Rahul Gandhi mentioned in his tweet.

Use Lockdown as the Last Option: PM Modi In Address to the Nation

Prime Minister Narendra Modi addressed the nation on Tuesday, amidst the steep rise in the country's daily cases of...

Use Lockdown as the Last Option: PM Modi In Address to...