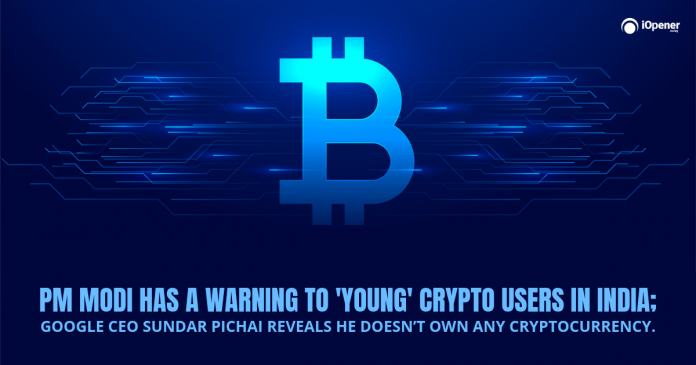 On Thursday, Prime Minister Narendra Modi warned that bitcoin presents a risk to younger generations as the government prepares to introduce legislation to regulate digital currencies.

The Prime Minister’s caution comes days after he held discussions on how to move forward on cryptocurrency in India, with concerns raised on unregulated crypto markets becoming avenues for money laundering and terror financing.

Speaking at the Sydney Dialogue, a forum on emerging, critical and cybertechnologies, PM Modi framed virtual money as a domain that needs to be closely policed.

“Take cryptocurrency or bitcoin, for example. It is important that all democratic nations work together on this and ensure it does not end up in the wrong hands, which can spoil our youths ” the Prime Minister told a forum hosted by the Australian Strategic Policy Institute.

The Centre is considering a regulatory framework to manage and oversee investments made in cryptocurrency. Earlier a report said that the government could bar the use of cryptocurrencies for transactions or making payments, but could allow them to be held as assets like gold, shares or bonds.

India effectively outlawed crypto transactions in 2018, only for the country’s top court to strike down the ban two years later. Today, more than 100 million Indians have embraced virtual currencies, ranking the country behind only the United States, Russia and Nigeria in terms of users, according to a report last month by investment portal BrokerChooser. There have been growing calls for India to issue another ban, but the government appears set to stop short, preferring instead strict legislation that could be passed before the end of the year.

Cryptocurrencies are still not taxed in India, but have not been recognised as an official currency. Speaking about Modi’s recent comments on cryptocurrencies, WazirX founder Nischal Shetty took a neutral stand. “Our respected Prime Minister speaking about crypto and the need for regulation is a great thing for India. It means a lot to the crypto ecosystem. It further strengthens our belief that India will stay ahead in this global phenomenon,” he told News18.com.

The Reserve Bank of India has repeatedly warned against cryptocurrency, worrying that the macro-economic aspects and the financial stability of the country will be hampered if the coins are allowed to flow freely. At the same time the central bank is looking at issuing its own official digital currency.

Google and parent company Alphabet CEO, Sundar Pichai, believes that not the metaverse, but the humble search bar, which through the years has remained constant, is the way to the future of the Internet. “I feel fortunate our mission is timeless. There’s more need to organize information than ever before. I’ve always been excited about the future of immersive computing. This doesn’t belong to any company. This is the evolution of the internet,” Pichai said in an interview with Bloomberg Television’s Emily Chang for the Bloomberg New Economy Forum in Singapore. Unlike its competitors, Microsoft and Facebook (now Meta) the future, Pichai believes, isn’t based in virtual reality, but in AI. In the interview, Pichai mentioned that he does not own any cryptocurrency. “I wish I did. I’ve dabbled in it, you know, in and out,” he said.