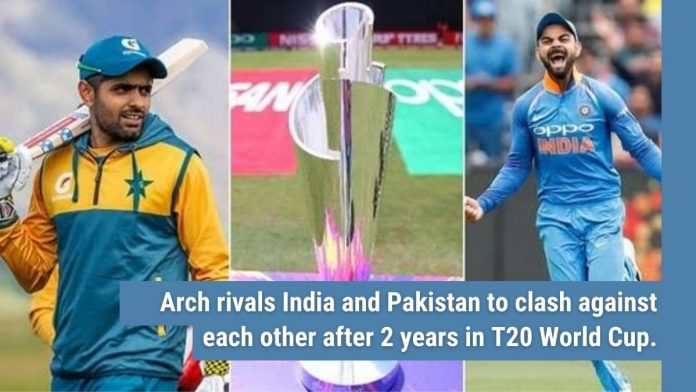 Arch-rivals India and Pakistan will clash against each other after almost 2 years at the T20 World Cup later this year. The teams will meet in the Super 12s stage, which will be co-hosted by the UAE and Oman between October 17 and November 14, the ICC announced on Friday. This will make it the first face-off between the teams after a long duration with the last encounter being in the 2019 50-over World Cup in England.

The groups, selected on the basis of team rankings as of 20 March 2021, see defending champions West Indies grouped along with former champions England, Australia and South Africa in Group 1 of the Super 12s, with two qualifiers from Round 1 joining them.

Group 2 will comprise former champions India and Pakistan, New Zealand, Afghanistan and the other two qualifiers from Round 1. Eight teams will contest the first round including automatic qualifiers Sri Lanka and Bangladesh with the remaining six who booked their spot through the ICC Men’s T20 World Cup Qualifier 2019. Ireland, Netherlands and Namibia join Sri Lanka in Group A, while Oman, PNG and Scotland will face Bangladesh in Group B.

Meanwhile, cricket fans all around the world are excited to witness the biggest clash of cricket between Virat Kohli’s India and Babar Azam’s Pakistan. While they no longer are playing each other in bilateral series, India vs Pakistan fixture has been only limited to ICC tournaments, which adds to the hype even more. The two teams have engaged in battle in every ICC tournament since the 2011 World Cup, with Pakistan having beaten India only once. The news of India vs Pakistan taking place blew the roof off Twitter, with fans expressing their excitement at the mother of battles.

“We are delighted to announce the groups for the T20 World Cup 2021. There are some great match ups offered by the groups and it starts to bring the event to life for our fans as our first multi-team event since the onset of the global pandemic draws closer.” ICC Acting Chief Executive Geoff Allardice said.

Meanwhile, BCCI President Sourav Ganguly said, “It is good to get Oman in the frame of world cricket with the hosting of the T20 World Cup. It will help a lot of young players take an interest in the game. We know it will be a world class event in this part of the world.”

“With the announcement of groupings, our countdown for the ICC T20 World Cup has kick started. There is nothing that separates the two groups as both are packed with sides that are highly competitive in the shortest format of the game. Having said that, the exciting T20 format is known for its surprises, and we must be prepared for the same. I am sure we will witness some exciting and nail-biting games”, BCCI Secretary Jay Shah said.

“I am particularly delighted to be in Oman. As a major force in world cricket, the BCCI has always endeavored to promote and assist Associate Nations. In my capacity as Asian Cricket Council President, my vision is to take cricket far and deep into Asia. Co-hosting the World Cup will put Oman Cricket on the global stage. They are also playing the Qualifiers and it will be an icing on the cake if they make it to the Super 12s.” he added.

Get a handle on your thoughts