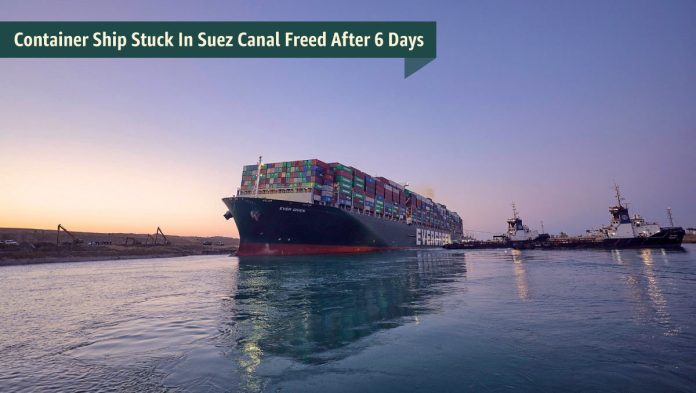 The Ever Given container ship, operated by Evergreen Marine Corp, has been dislodged and is now floating, after blocking the Suez Canal for almost a week, authorities said Monday. The huge container ship was trapped last Tuesday during a sandstorm. For almost a week, it was stuck diagonally on one of the world’s key shipping lanes, causing the tailback to increase and many ships to be rerouted.

The vessel fully refloated and headed north after the tedious efforts of the tug boats who had to spend several hours on Monday to free the bow of the massive vessel – 400m long (1,300ft).

The successful refloating was met with lot of cheer and relief, as hundreds of vessels that have been stuck since last Tuesday get ready to restart their journeys.

Marine traffic websites displayed images of the ship away from the banks of the Suez Canal for the first time in a week following an around-the-clock international effort to reopen the global shipping lane, reported CNN.

“We pulled it off!” Boskalis, a salvage company which helped with the operation, said on Monday.

“Boskalis announces the successful salvage operation of the grounded 20,000 TEU container vessel Ever Given in the Suez Canal,” “With a length of 400 meters and a width of nearly 60 meters, this giant ship had been wedged in this vital shipping route since 23 March 2021 blocking all shipping traffic.” The firm said.

According to Evergreen, the ship was refloated at 3pm Egypt Standard Time on Monday,

Lt. Gen. Osama Rabie, chairman of the Suez Canal Authority, said in a press conference on Monday that the vessel is now in Bitter Lakes.

“We will not allow it to leave before making sure that it is safe to sail, and also after conducting an investigation to find out the cause of the accident, because this will entail compensation. The Canal from its part does not have any error,” Rabie said.

Navigation on both directions of the Suez Canal resumed at 6 pm local time, he said. The challenge faced now is the backlog and congestion of the ships, he said, adding that at the current rate of working day and night, it could take three or three and a half days to end the congestion of ships.

There are still 422 ships waiting to go through the Suez Canal, Rabie said. He also added that the canal’s authorities decided the ships will be able to cross the canal on a first come first serve basis, though the ships carrying livestock were permitted to cross in the first convoy of the day.

Still, shipping giant Maersk issued an advisory telling customers it could take “6 days or more” for the line to clear.

People and the surrounding boats at the canal cheered as one of the biggest salvage operations succeeded.