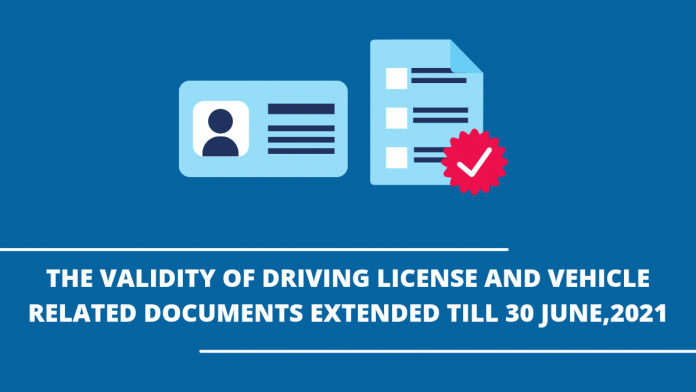 The Validity Of Driving License And Vehicle Related Documents Extended Till 30 June,2021

The Ministry of Road, Transport and Highways (MoRTH) issued an advisory to the states about the extension for the validity of various documents such as Driving Licenses, Registration Certificates and others. The ministry said that the documents whose validity could not be extended due to the lockdown or had expired since February 1, 2021, or would expire on March 31, 2021, will all be given an extension till 30, June, 2021, amid the Coronavirus pandemic.

There were similar advisories issued by the government earlier, with the aim of providing relief to vehicle owners in the midst of the pandemic and this is the fourth extension since the pandemic started. Last time, the deadline for the validity of the documents was set on March 31, 2021. The government has also said that this could be the last extension in validity, after which users will need to have their lapsed documents renewed as per the procedure.

The Ministry has requested states to treat these documents as valid in ‘letter and in spirit’ and mentioned that the decision “will help out citizens in availing transport-related services.”

The renewal of driving license can be done anytime between one year before its expiry till one year after its expiry.

Those who are seeking new driving licenses will now be required to pass strict tests which will include reversing a vehicle with reasonable accuracy. Union Minister for Road Transport and Highways Nitin Gadkari told the Lok Sabha in a written reply that the rules and the passing percentage for the driving licence test will change.

“In the case of a vehicle having a reverse gear, driving the vehicle backwards, reverse it into a limited opening either to the right or left under control and with reasonable accuracy is one of the parameters of qualifying in the driving skill test,” news agency PTI quoted Gadkari as saying.