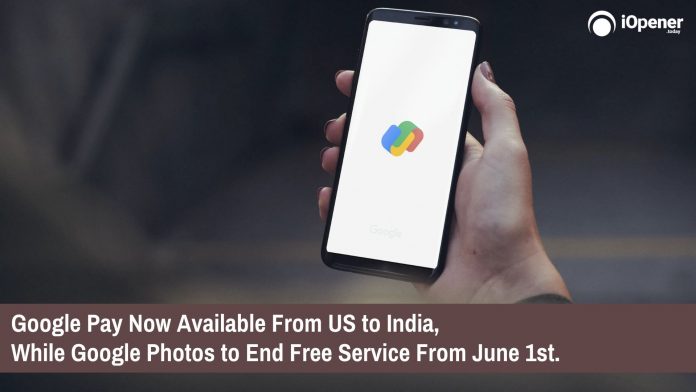 Google Pay Now Available From US To India, While Google Photos To End Free Service From June 1st

On Tuesday, the company announced that Google Pay users in the US will now be able to send money to users in India and Singapore.

Here are the few steps to send the money internationally from Google Pay:

Step 1: Download the latest version of Google Pay from the Play Store, if you do not have the new app redesign.

Step 2: Set up the Google Pay app by following the steps set out by Google which involves setting up your bank account.

Step 3: Now tap the ‘Pay’ button on the new Google Pay app home screen and choose between Western or Wise.

Step 4: Follow the instructions to complete the payment process.

Google also says US users will have free transfers from Western Union until June 16, while Wise will allow one free transfer, provided the amount is under $500.

In another significant development involving the internet-giant, Google Photos users will lose the free storage they have been enjoying for the past few years.

Last year, Google had announced that they are ending the unlimited free photo backup on Google Photos which means after June 1, 2021, users will not be able to use Google Photos cloud storage to backup and store unlimited ‘high quality’ for free.

In November,2020, Google Photos Product lead David Lieb explained on Twitter that the storage policy needs to be changed because free backups are costing big to the company. It is a necessary step to ‘align the primary cost’ of offering free service while also accepting the “primary value” of online storage.

Google says “over 1 billion people back up a remarkable 28 billion photos to Google Photos each week. In order to welcome even more of your memories and build for the future, we are making this change.”

It is worth noting that all the existing high-quality content will remain exempted from storage quota. This means that if users upload any photo or video in high quality before June 1, 2021, then those won’t be counted toward your Google account storage. Google will also delete the content of accounts inactive for more than two years starting June 1.