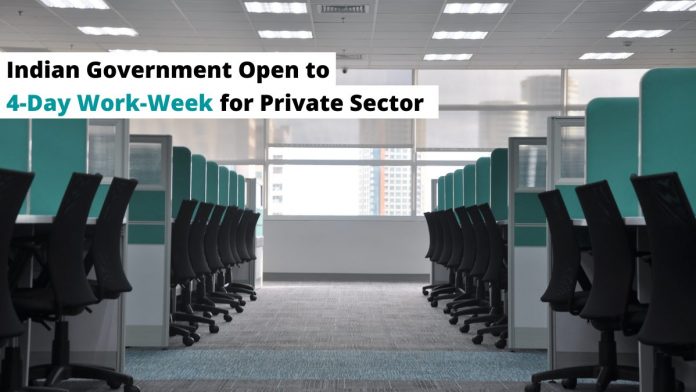 The union government is open to the idea of a 4-day work week and has offered them the flexibility to choose the same alongside longer shifts.

On Monday, Labour and Employment Secretary Apurva Chandra said, “The new labour codes set to be implemented soon would provide companies the flexibility of reducing the number of working days to four days a week and provide free medical check-ups to workers through the Employees State Insurance Corporation.”

Speaking to reporters, Mr. Chandra said the draft rules under the labour codes are being finalized.

He said the concerns about the working hours going up from 10.5 hours to 12 hours, with one hour of rest, that arose during consultations had been addressed.

Under the Occupational Safety, Health and Working Conditions Code, 2020 draft rules, the limit of working hours for a week was 48 hours and it will stay the same.

“The weekly 48-hour work limit will stay but employers will be able to deploy people on four, 12-hour workdays per week; or five, around 10-hour days; or six, eight-hour days,” Apurva Chandra told reporters.

He stated that ESIC would provide free medical check-ups to workers so the employer does not have to bear the costs.

“We are not forcing employees or employers. It gives flexibility. It’s an enabling provision in sync with the changing work culture,” Chandra said.

The new labour code will allow employers to shift to a four or a five-day working week without seeking government approval, if the employees approve of the arrangement.

Chandra said, “employers will have to ensure that if they choose a four-day work week, there has to be a three-day break, and if it is a five-day week, two days of break before starting a new work week has to be implemented.”

Many employees are excited with this provision to work on a four day basis as they will get extra time for other activities.

“Once the new labour code is in place,” experts said, “employers will have the freedom to choose to have 8 to 12 hours workdays, based on demand, industry and location.”

“It will benefit sectors such as information technology and shared services. In the banking and financial services industry, 20-30% people can use the long working hours template for four or five days and enjoy a longer break. Profiles like human resources and finance verticals can easily adopt such a practice faster. It shall also benefit a new generation of workers who value ‘me time’ and would prefer working long hours for fewer days to get an extra off. Besides, foreign firms will be the first to adopt it as this will reduce their real estate expenditure at one end and improve productivity of workers on the other. The covid-19 work culture has given companies a proof of concept and its adoption won’t be tough,” said Kamal Karanth, co-founder of human resource firm Xpheno and a former managing director (India) of global staffing firm Kelly Services.

“Up to 12 hours of work plus commute time for four and five days, will be taxing on workers, especially in factory settings. The work-life balance may get impacted,” added K.R. Shyam Sundar, a labour economist.

“The move will benefit both employees and employers. It’s not enforcement but an option. I believe labour-intensive sectors such as manufacturing will adopt them. Imagine a company doing the same work in four days instead of five and the benefit of saving one day of operational cost—that’s a big positive,” Rituparna Chakraborty, executive vice-president and co-founder of staffing company TeamLease Services, said.

Speaking about the Budget announcements regarding the Ministry, Mr. Chandra said, “a portal for collecting information on gig, building and construction workers would be started by May or June. This would help in formulating health, housing, food and other schemes for migrant workers.”

The Budget had included interest from Provident Fund contributions over ₹2.5 lakh being taxed. Mr. Chandra said 1.23 lakh people out of the 6.5 crore PF contributing accounts would be impacted by this.

"We must find time to stop and thank the people who make a difference in our lives." - John F. Kennedy
Pearls