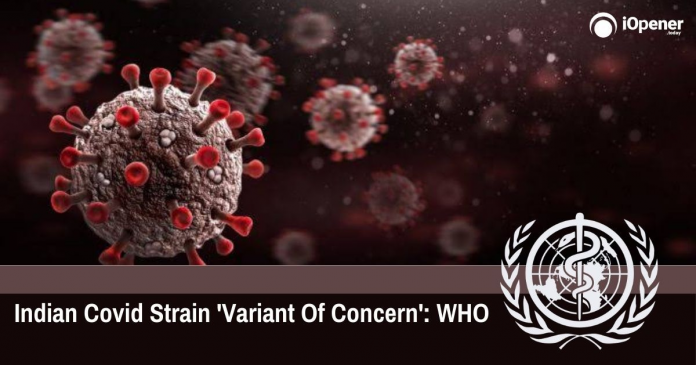 The World Health Organization(WHO) said that the Covid-19 variant spreading in India, appears to be more contagious and has been classified as being “of concern.”

The UN health agency mentioned that the B.1.617 variant of Covid-19 found in India last October seemed to be transmitting more easily than the original version of the virus and might possibly have some increased resistance to vaccine protections.

The findings come at a time when India reported nearly 3,70,000 fresh infections and more than 3,700 new deaths on Monday. Covid-19 has also affected the domestic healthcare system.

The WHO has listed the mutant merely as a “variant of interest.” And now it will be added to the list containing three other variants of Covid-19, those first detected in Britain, Brazil and South Africa which the WHO has classified as being “of concern.”

In an exclusive interview with CNBC-TV18’s Sheeren Bhan, World Health Organization (WHO) Chief Scientist Dr Soumya Swaminathan said that the double mutation strain consists of variants found in Brazil and South Africa and it evades the body’s immune response. “The surge in India increases chances of more dangerous variants emerging. Prelim data shows that the Indian variant is more contagious. There is heterogeneity in India in terms of the spread of Covid-19. WHO is concerned about the number of cases and deaths in India. Globally, cases and deaths have plateaued, not in South Asia,” she said.

Concerning the need and urgency for people to get vaccinated Dr Soumya Swaminathan reminded that there remains a paucity of data to make strong claims but all the vaccines available today have proven to be effective in preventing infections and death.

“There is not enough data to show that the double mutant is vaccine-resistant. All the available vaccines today in India and elsewhere prevent severe disease and death even if you get the infection. You are not going to end up in the ICU critically ill. The message is to take the vaccine whichever is available and you are eligible for it. If your turn is there, please take it,” she added.

The Indian variant may be “dodging vaccine protections”, contributing to the country’s explosive outbreak, a statement said by Dr Soumya in an interview with AFP.

“It would have been easier to compare and clear vaccines for approval by WHO if all vaccine makers had followed WHO solidarity trials procedure. We (WHO) are hoping to get more data on vaccines like Sputnik, Sinopharm, etc. Israel’s vaccination has shown Pfizer shot is around 90 per cent effective in the real world,” said Swaminathan.

The WHO scientist also pointed out that head to head vaccine trials should have been done from the beginning.