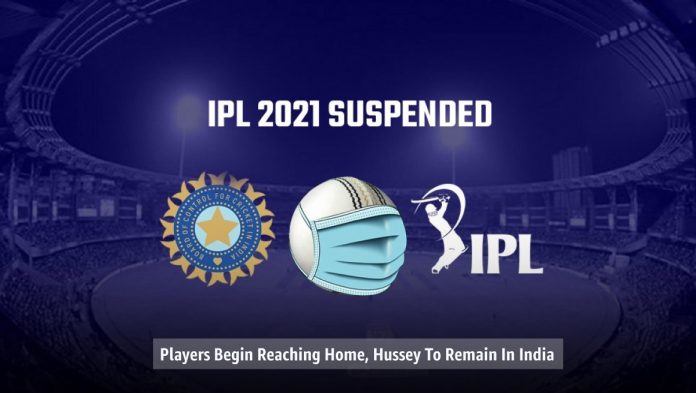 The IPL 2021 has been suspended after multiple COVID-19 cases were reported in the past few days. “The Indian Premier League Governing Council (IPL GC) and Board of Control for Cricket in India (BCCI) in an emergency meeting has unanimously decided to postpone IPL 2021 season, with immediate effect. The BCCI does not want to compromise on the safety of the players, support staff and the other participants involved in organizing the IPL. This decision was taken keeping the safety, health and well-being of all the stakeholders in mind,” stated an IPL press release.

The decision came after Sunrisers Hyderabad’s wicketkeeper-batsman Wriddhiman Saha and Delhi Capitals’ veteran spinner Amit Mishra also tested positive for COVID-19. The tournament began on April 9 and ran smoothly for 29 matches. The final was planned for May 30.

IPL Governing Council chairman Brijesh Patel said that they are looking for another window for the play to be rescheduled_. “We are looking for another window, but at the moment we can’t say when it would be rescheduled,”_ he mentioned. He also said that the BCCI would help the franchises arrange for the return of their foreign players. Those who have tested positive for Covid-19, have to follow the tournament’s quarantine protocols which is six days isolation for close contacts and three negative tests before leaving.

Shukla while speaking to Star Sports said that the situation is very bad in India and a few players wanted to leave the country as they are scared of the current situation, so taking into consideration all aspects, the decision to suspend the IPL was taken. Also he made it clear that the IPL is not cancelled but has been postponed and will conduct when the situation improves.

This year’s T20 World Cup will probably shift from India to the UAE as “a third wave” of COVID-19 cases is expected at the time of the event.

On Wednesday, eight of the 11 England players who were part of the now-postponed Indian Premier League returned home. According to Sky Sports, Sam Curran, Tom Curran, Sam Billings, Chris Woakes, Moeen Ali and Jason Roy are also back in the UK. Chennai Super Kings batting coach Michael Hussey will stay back in India to recover from Covid-19 as he tested positive for Covid-19 a second time on Tuesday and is now forced to serve a 10 days isolation at the team hotel in Delhi.

“His (Hussey’s) symptoms are relatively mild, so he’s in for a stint of isolation in his hotel for at least 10 days, but his team have got some really good support systems around him, which is good,” Greenberg was quoted as saying by the Sydney Morning Herald.

The Australian government had banned all travellers from India last week, including Australian citizens, from entering the country until May 15. BCCI officials said that the 14 Australian cricketers in the IPL are expected to get a safe passage home after May 15 and also those travelling back to South Africa will undergo home quarantine in line with the current World Health Organization (WHO) recommendations.

The immediate cause that led to the suspension:

After the Covid outbreak last year, the IPL was held in the month of September in the UAE. This time, the tournament was confined to four cities in India. On Monday, Kolkata spinner Varun Chakravarthy and medium pacer Sandeep Warrier tested positive that resulted in the suspension of the match between the Knight Riders and the Royal Challengers Bangalore in Ahmedabad. Chennai Super Kings chief executive Kasi Viswanathan and bowling coach Laxmipathy Balaji too tested positive, however, Viswanathan’s second test was negative. Chennai officially announced its inability to play Wednesday’s game against Rajasthan Royals.

The Chennai Super Kings had gone into isolation for a week. The Saha news soon followed, before the tournament’s postponement was announced.

The rising numbers of the new positive cases daily over the past few days is around 400,000 that resulted in several countries to ban travellers from India. The players were getting anxious. Liam Livingstone and Andrew Tye (both Rajasthan Royals) and the Royal Challengers pair of Adam Zampa and Kane Richardson returned to England and Australia. The Delhi Capitals lead spinner R Ashwin also left the IPL. Senior Indian umpire Nitin Menon too returned home to Indore to attend to his parents, who were positive.