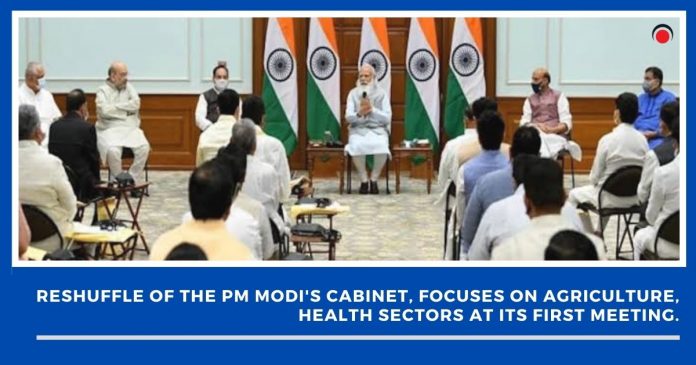 Reshuffle Of The PM Modi’s Cabinet, Focuses On Agriculture, Health Sectors At Its First Meeting

In the expansion of the Council of Ministers, the Prime Minister Narendra Modi on Wednesday had assigned key responsibilities such as IT and Communication to the Wharton-educated Ashwini Vaishnaw, Health to Mansukh Mandaviya, and Civil Aviation to Jyotiraditya Scindia. Meanwhile, Education and Skill Development has been reassigned to Dharmendra Pradhan, Environment, Labour and Employment to Bhupendra Yadav, Information and Broadcasting to Anurag Thakur and Law to Kiren Rijiju. With the 36 new faces were introduced and 12 sitting ministers shown the door, the tally in the Council of Ministers now stands at 78 (including the PM).

On Wednesday, Forty-four ministers took oath as part of the first reshuffle in the second stint of the government led by PM Modi. Fifteen of them became part of the Union Cabinet. It was preceded by exits of 12 ministers including high-profile names like Ravi Shankar Prasad, Dr Harshvardhan and Prakash Javadekar, who were seen to be among the core team of the Prime Minister.

The resignations sent out the message that the government’s focus was on performance.

The first meeting of the Prime Minister Narendra Modi’s new Union Cabinet took a series of decisions with a focus on the agriculture and health sectors.The new Union health minister, Mansukh Mandaviya, announced the details of the 23,123 crore emergency response package earmarked by the government to combat the COVID-19 pandemic.
He said that the package, which is the second announced by the government, will be used to increase infrastructure to ensure that the country does not face critical input shortages as seen during the peak of the second wave. “The 23 billion rupee package will be used jointly by the central and state governments,” Mandaviya told a news conference. He also said that the package will be rolled out over the next nine months.

The cabinet also discussed the possible impact of Covid on children. Mandaviya said that the pediatric care centers will be formed in up to 736 districts across the country with the new package and 20,000 ICU beds will also be under Covid’s aid package.

The Cabinet also made several important decisions for the agricultural sector. Agriculture Minister Narendra Singh Tomar clarified that the rupee 1 lakh crore fund is for farmers through the APMC (Agricultural Products Marketing Committee) and announced the reconstitution of the coconut board.

Every one who is seriously involved in the pursuit of science becomes convinced that a spirit is manifest in...
Pearls

A fine glass vase goes from treasure to trash, the moment it is broken. Fortunately, something else happens to...
Pearls

Give all your worries and cares to God, for he cares about you. - Bible