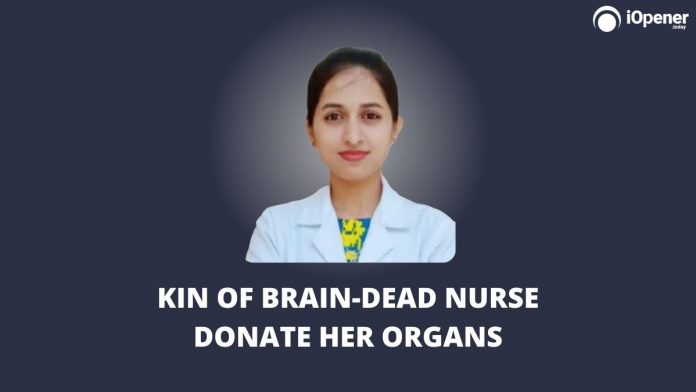 A 22-year-old nurse who fainted at work and was later declared brain dead gave new life to a few individuals by donating her organs. Ganvi TK, who was working in Nirmala Nursing home in Shivamogga, collapsed at her workplace on February 8 while on her night shift. Immediately, she was taken to Nanjappa hospital, where she had worked earlier but later was transferred to PMSSY in Bengaluru.

The doctors said that she was put on a ventilator after her surgery. But on February 12, she was declared brain-dead and her family opted to donate her organs.

After Ganvi’s mother, sister and uncle expressed the desire to donate her organs, the donor’s body was shifted to the Institute of Gastroenterology and Organ Transplant (IGOT) for organ retrieval by Jeevasarthakathe, the State Organ and Tissue Transplant Organisation, which is the nodal agency that facilitates cadaveric organ donations. The sources said that the mother consented, her sister and uncle witnessed the decision. “Although the family had consented for all organs, we could utilise her liver, kidneys, heart valves, and corneas,” Lijamol Joseph, chief transplant coordinator, Jeevasarthakathe, told The Hindu.

Health Minister K Sudhakar took to Twitter to applaud the 22-year-old for curing and caring for patients while alive and then gifting them her organs after death. “The 22-year-old staff nurse T.K. Ganvi who donated her organs after a tragic death is an example of “Paropakararthaṃ yo jivati sa jivati” — they alone live who live for others. Hats off to the family of Ganvi for their kindness amid heart-wrenching tragedy. The young girl is an inspiration to all of us to pledge for organ donation. This was the first organ retrieval at the IGOT,” he further said.