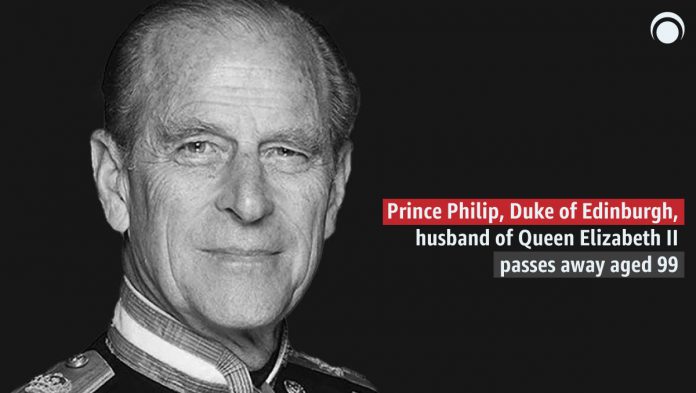 Prince Philip, the Duke of Edinburgh, Queen Elizabeth II’s husband, passed away at the age of 99, Buckingham Palace announced on Friday.

The Duke of Edinburgh had been by his wife’s side throughout her 69-year reign, which is the longest in British history.

“It is with deep sorrow that Her Majesty The Queen announces the death of her beloved husband, His Royal Highness The Prince Philip, Duke of Edinburgh,” the palace said in a statement.

“His Royal Highness passed away peacefully this morning at Windsor Castle. The Royal Family join with people around the world in mourning his loss.” The official statement added.

While announcing his passing, BBC television played the national anthem over a picture of Prince Philip, dressed in his military uniform.

The flags were lowered to half-mast on royal and government buildings and a notice which announced his death was pinned to the gates of Buckingham Palace.

Meanwhile, the government urged the public not to gather or leave tributes at royal residences amid the covid-19 pandemic.

Also, the Royal Family has asked people to consider making a donation to a charity instead of leaving flowers in memory of the duke, and for those who wish to send messages, an online book of condolence has been launched on the official royal website.

Westminster Abbey began tolling its tenor bell once every 60 seconds at 18:00 BST in tribute to the duke. It rang out 99 times to honor each year of his life.

“We give thanks, as a nation and a kingdom, for the extraordinary life and work of Prince Philip, Duke of Edinburgh,” British Prime Minister Boris Johnson said outside 10 Downing Street.

Mr. Johnson said Prince Philip had “earned the affection of generations” at home, in the Commonwealth and across the world after first serving in the Royal Navy and then over nearly eight decades beside the queen.

Justin Welby, the Archbishop of Canterbury, said he “consistently put the interests of others ahead of his own and, in so doing, provided an outstanding example of Christian service”.

Meanwhile, tributes poured in from the U.S., Europe and countries including Australia, India and New Zealand.

“My thoughts are with the British people and the Royal Family on the passing away of HRH The Prince Philip, Duke of Edinburgh,” PM Modi tweeted.

“He had a distinguished career in the military and was at the forefront of many community service initiatives. May his soul rest in peace.” He added.

Born into the Greek and Danish Royal families, the Prince married Elizabeth in 1947, five years before she became Queen. He played a key role in modernizing the monarchy, and was the one key figure the queen could turn to and trust.

The duke was admitted on 16 February after feeling unwell, and underwent a procedure for a pre-existing heart condition at another London hospital – St Bartholomew’s.

Later, he left King Edward VII’s hospital in central London in March, after a month-long stay for treatment.