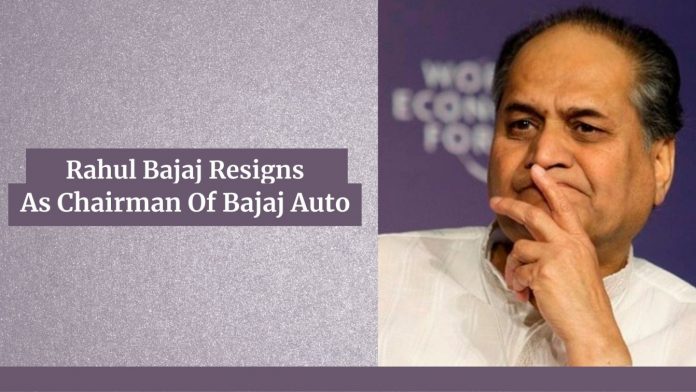 Bajaj Auto has announced the departure of its non-executive director and chairman Rahul Bajaj, as he moves on to become the Chairman Emeritus. His new position will be for a term of five years with effect from May 1, 2021. This was revealed in an exchange filing, as the company added that Niraj Bajaj who is currently a non-executive Director of Bajaj Auto has been elevated to the role of chairman with effect from the same date.

Bajaj Auto, India’s largest two-wheeler manufacturer said that Rahul Bajaj, who has been at the helm of the company since 1972 and of the Bajaj Group for five decades, has tendered his resignation considering his age. And that the same will come into effect from close of business hours on April 30, 2021.

“Shri Rahul Bajaj has made a huge contribution to the success of the Company and the Group over the last five decades. Considering his tremendous experience and in the interest of the Company and to continue to benefit from his experience, knowledge, and wisdom from time to time in an advisory role and as a mentor, the Board of Directors at its meeting held today and as recommended by Nomination and Remuneration Committee has approved the appointment of Shri Rahul Bajaj as Chairman Emeritus of the Company for a term of five years with effect from 1 May 2021. This will be taken up at the ensuing annual general meeting for the approval of the shareholders,” the company statement said.

Rahul Bajaj was instrumental in splitting Bajaj Auto into different units – Bajaj Auto and Bajaj Finserv, establishments which are run by his sons Rajiv Bajaj and Sanjiv Bajaj, respectively. Last year, Rahul Bajaj had resigned as executive chairman and whole-time director at Bajaj Auto, ending a 50-year stint in an executive role.

According to Forbes, as per April 2021, Bajaj’s net worth was $6.3 billion. Bajaj is an alumnus of Harvard Business School as well as the recipient of one of India’s top civilian honours, Padma Bhushan.

Fidel Alejandro Castro Ruz, a Cuban revolutionary, was the political leader of Cuba for nearly half a century. He...