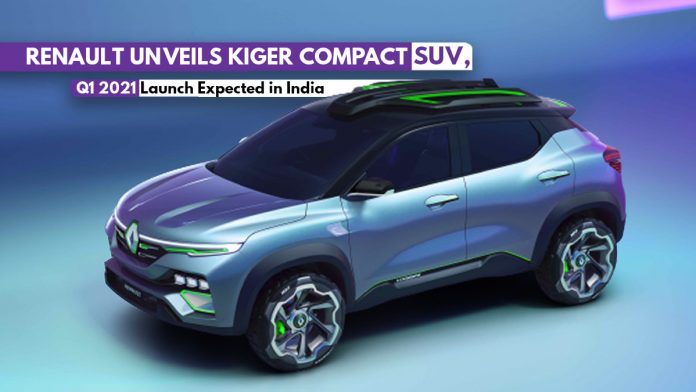 French automaker Renault officially unveiled the Kiger Compact SUV and said that the subcompact SUV will be available in showrooms later this year. Powered by a 1.0-litre naturally aspirated engine and a 1.0-litre turbo-charged engine, the Kiger will be in direct competition against the Kia Sonnet, Tata Nexon, and Hyundai Venue, amongst others.

The latest offering from the Renault stable is likely to be priced in the usual B-SUVs price band of Rs. 6 to Rs. 8 lakhs and will have 5-speed manual as well as 5-speed AMT & CVT versions available to customers.

Kiger will be based on the CMF-A+ platform, co-developed by Renault & Nissan, the company’s second vehicle based on this platform. The car will be manufactured at Renault’s Tamil Nadu facility and is 80% similar to the concept version that was showcased last year.

Having three driving modes – eco, normal, and sport – the Kiger will also showcase dynamic design features such as split LED headlamps, a bold new grille, and LED DRLs on the front. According to leading auto portal CarAndBike, the model will have pronounced wheel arches, and diamond-cut alloys specific to the variant.

“The arches at the rear are particularly flared and also incorporate the C-shaped LED taillights with the signature pattern. You also see butch bumpers at either end with a skid plate at the rear, roof rails and a roof-mounted spoiler at the rear to complete the look.

“The model also gets a high ground clearance at about 205 mm,” said the CarAndBike review.

The second row of the Kiger will be foldable and that will expand its already spacious boot of 405 litres to 879 liters.

In the front, the Kiger will have an Auditorium 3D Sound system by Arkamys and the top-end trims will come with white ambient lighting in the passenger compartment. For the environmentally conscious buyers, the Kiger comes with the first-in-the-segment PM2.5 clean air filter.

Wireless charging, an 8-inch floating touchscreen infotainment system, a 7-inch digital instrument console, climate control, engine start-stop, and steering mounted controls are some of the other goodies packed into the Kiger. A dual-tone cabin with fabric upholstery adds to the allure of the subcompact SUV.