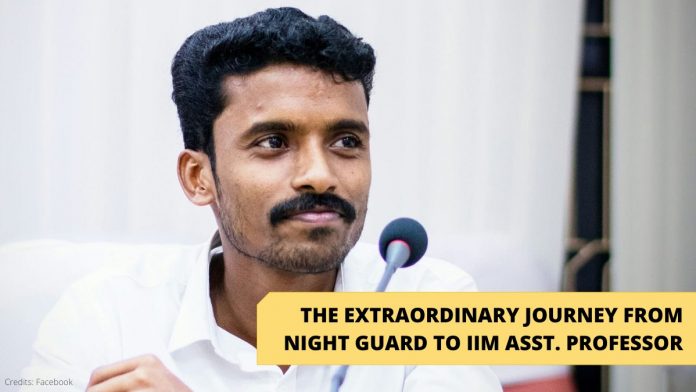 The Extraordinary Journey from Night Guard to IIM Asst. Professor

The story of a 28-year-old man named Ranjith Ramachandran who recently realized his dream of becoming an assistant professor at IIM in Ranchi has become an inspiration to everyone around him as well as the world. His journey is an example of how hard work and dedication can lead to success if you keep trying with patience.

Ranjith who goes by the name ‘Ranjith R. Panathoor’ on social media was born in a village in Kerala’s Kasaragod district. His father was a tailor and his mother an MNREGA (Mahatma Gandhi National Rural Employment Guarantee Act) worker. Being the eldest among three siblings, he lived in a small leaky hut that consisted of small and cramped rooms. He worked as a night security guard to support his studies as his family found it hard to make ends meet.

He balanced his studies along with the night guard duty at a BSNL Telephone Exchange that earned him Rs 4000 a month. It became his temporary home after coming back from school and college. He only went home to eat.

He graduated from St Pius X College in BA Economics and completed MA Economics from Central University of Kerala. He went to IIT Madras to pursue the Ph.D. programme. However, he had trouble settling in, so much that at one point he wanted to quit his Ph.D. programme in the institute.

It was until a couple residing on campus- Dr. Subash Sasidhaaran and his wife Vaidehi- came to his rescue. “Prof. Subash, who was my guide, encouraged and convinced me that my decision to quit would be long,” he told the Indian Express.

This motivated him to dream higher and fight for it to come true. He got his Ph.D. in Economics in 2016.

Then, he became an assistant professor at Bangalore’s Christ University after which he got the offer from IIM Ranchi.

Becoming an assistant professor in a prestigious institute like IIM is nothing short of an achievement, especially with the kind of journey he had.

He took to Facebook and shared a picture of his home saying, “An IIM Assistant Professor was born in this place.”

Kerala Finance Minister T M Thomas Isaac also took to Facebook to congratulate Ranjith, saying he is a source of pride and inspiration to everyone.

“The lives of people like Ranjith, who refuse to get discouraged due to various crises and use education as a weapon to overcome social and economic backwardness, are an inspiration to all. We have similar examples from lives of great personalities like K R Narayanan who achieved great things in life because of extraordinary willpower.” Dr. Isaac said while sharing Ranjith’s post.

“I never thought the post would go viral. I posted my life story, hoping that it would inspire a few others. I want everyone to dream good and fight for their dreams. I want other people to get inspired from this and find success,” Ranjith told reporters.

Let the story of Ranjith Ramachandran who dared to dream be an inspiration to everyone to never stop dreaming and fighting for your dreams!