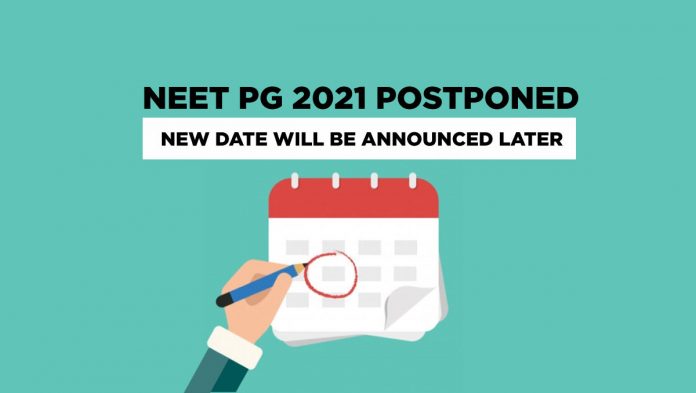 In view of the rising Covid-19 cases, the NEET-PG medical entrance exams which were scheduled for this Sunday, April 18th have been postponed the Union Health Minister Dr Harsh Vardhan tweeted on Thursday evening.

“The NEET-PG medical entrance exams – scheduled for Sunday – have been postponed in light of the surge in COVID-19 cases,” said the Minister.

He added that a new date for the exam will be announced later.

“Next date to be decided later. Decision has been taken keeping well-being of our young medical students in mind ” he said.

Before the Centre announced its decision, a group of student doctors had moved the Supreme Court asking for the exam to be deferred. A bench headed by Chief Justice of India SA Bobde will hear the matter tomorrow. The petitioners had said forcing doctors who treat COVID-19 patients on a daily basis to attend a physical exam would put thousands at risk. The petition also stated that when the exam in January got cancelled, the pandemic situation of the country was not this critical. For the past few weeks, an outcry was raised by NEET candidates with “#postponeneetpg” trending online.

DMK chief MK Stalin, whose party is a vocal critic of the NEET system, also spoke out.”With increasing cases and fatalities, and when our doctors are fighting hard against all odds, is this the right time to hold NEET for PG courses,” he said.

NEET PG examination which is conducted by the National Board of Examination is for doctors seeking admission in MS, MD courses. The examination was earlier scheduled to be held in January but was postponed due to the pandemic. India recorded over 2 lakh fresh Covid-19 cases on Thursday, the highest ever since the beginning of the pandemic in 2020, thus leading several states to decide the postpone of Board examination.

The National Board of Examination (NBE), which conducts this entrance test, had earlier petitioned to postpone the exam but it declined to do so, pointing to safety guidelines that include having multiple exam centers in each state, and staggered timings for candidates.

“Considering the importance of the examination in admitting post-graduates in their respective subjects for further training, it is in the best interest of candidates to continue to hold this examination on the announced date,” the Board said in its statement.