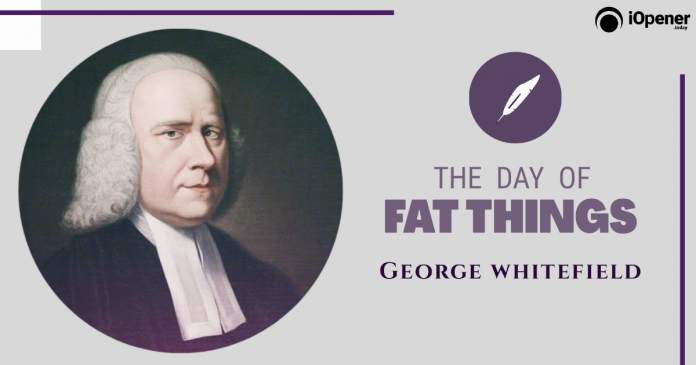 A Day Of Fat Things

The Anglican cleric, George Whitefield, was a prolific preacher, well known for open-air preaching throughout the 1700s. It is estimated that, in his lifetime, Whitefield preached 18000 sermons to over 10 million people across the UK & US. Newspapers of the time called him “marvel of the age”.

It was during his studies at the Pembroke, Oxford that George Whitefield was introduced to the group of pious Methodists who called themselves “The Holy Club” – led by the Wesley brothers John & Charles. His association with them eventually led him to be counted among the founders of Methodism and the ‘evangelical moment’. Whitefield completed his Bachelor of Arts, after which he was ordained as an Anglican minister on this day in 1739. He dubbed it “a day of fat things” in one of his journals.

George Whitefield, who had an avid interest in theatre & plays during the early part of his life, also wrote a well-known play called ‘Abraham Offering His Son Isaac’. It had carefully calibrated dialogues & monologues with thrilling plot twists, and a dramatic climax. This masterful piece of work was referenced by John Stott in many of his seminal writings during the late 1900’s.

Whitefield also carried this part of his experience with theatre into his preaching & sermons. There were rhetorical ploys that he used in his preaching, with an artistic flourish that was unknown to America in those times. This approach attracted huge crowds, to the extent that even the largest churches of the time, which could host 8000 people, had to start doing outdoor meetings to accommodate those who turned up to listen.