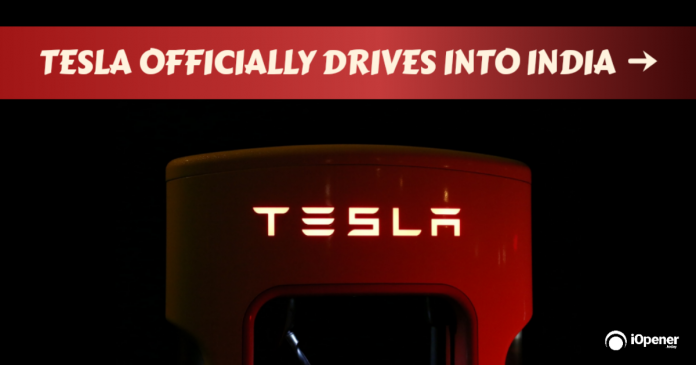 World’s leading electric car-maker Tesla has officially launched its much-awaited Indian operations. The company registered a foreign-owned Indian subsidiary in Bengaluru and is looking at potential sites to set-up its Indian manufacturing/assembly hub. While Elon Musk might be shifting base from the original silicon-valley, it is hardly surprising that the company chose the Indian silicon-valley Bengaluru to set up its India operations base.

This confirms the announcement made by Union Minister of Road Transport & Highways Shri Nitin Gadkari that Tesla was coming to India in the first half of 2021. The electric car manufacturer will be known as Tesla India Motors and Energy Private Limited, with three directors currently listed on its board. The registered entity has a paid-up capital of ₹1 lakh and an authorised capital of ₹15 lakh, according to the filings with the Ministry of Corporate Affairs. Vaibhav Taneja, Venkatrangam Sreeram and David Jon Feinstein are the three directors in the newly formed entity.

“Electric Vehicle Manufacturer Tesla will soon start its operations in India with an R&D unit in Bengaluru. I welcome @elonmusk to India & Karnataka and wish him all the very best,” the Chief Minister tweeted.

According to CNBC TV-18, Tesla is in talks with five state governments, which includes, in addition to Karnataka, the governments of Maharashtra, Gujarat, Andhra Pradesh, and Tamil Nadu, to setup manufacturing and R&D facilities. A global consulting firm has been hired to help the company zero in on suitable locations.

Tesla is expected to launch the Model 3 Sedan in the country, at an estimated price of ₹60-lakh ex-showroom. While it is still early days to predict how the EV growth curve will pan out in India, there is no denying that Tesla has carefully looked at the timing and is entering the Indian market while both the government and public are inclined to make an EV switch.

“Tesla’s likely entry into India comes at a time when the union and state governments have been encouraging higher adoption of green vehicle technologies to help bring down the carbon footprint,” explained LiveMint.

Tesla just rolled in, into the Indian market amidst much fanfare. This was especially true of social media, with...
General News

Bengaluru, the IT hub of India, has emerged as the world’s fastest-growing mature tech ecosystem in the world since...