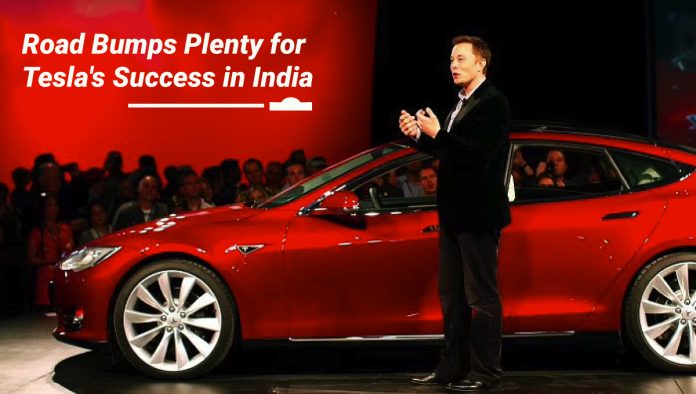 Tesla just rolled in, into the Indian market amidst much fanfare. This was especially true of social media, with fans going dizzy over the world’s most valued auto-maker’s entry into the Indian market. But will the excitement translate into sales and revenues? Because that is what will determine the automakers long-term success and stay in the country – which hasn’t quite been a happy hunting ground for US automakers in the past.

Most American automakers, if not all, have found the going rather tough in the Indian car market, but then Telsa lovers will be quick to point out that Tesla is anything but a conventional automaker. It is more of a technology company, in the mold of its founder Elon Musk and bears no resemblance to the traditional Detroit-based automobile manufacturers in the US.

The second concerning piece of the puzzle is the appetite for EV cars in India, in all of 2020 electric cars accounted for just 5000 of the 2.4 million cards sold in the country, with fewer local production facilities, non-existent charging infrastructure and relatively higher cost of owning an EV have been the contributing factors. And mind, at an estimated cost of Rs. 60 lakhs per car, Tesla isn’t quite your everyday purchase car either.

Then there is of course the factor of the Indian roads and Indian drivers – who are a law unto themselves. How will Tesla’s expensive, largely autonomous cars fare on the Indian roads – well right now, your guess is as good as mine.
Traditionally, the success of any automaker – be it the economy-driven South Asian manufacturers or the luxury brands from Europe – it is largely built on the volumes game. And every single one of them has built a robust supply chain to augment this volume-driven model. But Tesla’s volumes could easily be stymied by the lack of recharging infrastructure.

Ammar Master, a forecaster at consultancy LMC Automotive, said he expects Tesla to annually sell only 50-100 of its Model 3 electric sedans in India, at least in the first five years.

“As a country, India is still not so environmentally conscious to pay that much of a premium,” Master said.

“It always comes down to the price point. There could be some high-net worth individuals like movie stars and top business executives who will look at it for the brand value. But then how many buyers are there,” Master told the Times of India.

High import taxes don’t necessarily help and only add to the additional cost burden, as alluded to by Elon Musk himself. And thus, it is pertinent that Tesla starts and ramps up production facilities in India if it seeks to have a long-term future and success in India. That could be the way to reduce cost, expand market size, and slowly increase the charging infrastructure.

While all of this is just conjecture at this point, Chinese experts already expect stiff competition from India about investment and focus from Tesla. A discussion sparked on all Chinese social media platforms regarding Tesla’s plan to enter the Indian market, considering both the countries were similar in terms of a huge population.

However, Chinese experts downplayed Tesla’s moves in India, saying it won’t be able to copy its successes in China because the market in India is quite different. The consumption models are different, and India can’t provide the infrastructure and logistics facilities that China can.

“India’s car market, with annual sales of two or three million units, is only one-tenth that of China’s. Also, low-budget cars are the norm, instead of higher-end models like Tesla’s,” Zeng Zhiling, an analyst at Shanghai-based consultancy LMC Automotives, told the Global Times on Thursday.

Tesla entered China in 2013 and has achieved remarkable success in the past two years after building a production plant in Shanghai. It has so far launched two locally made models in China, the Model 3 and Y. Both were welcomed by local customers and lifted the country’s appetite for electric cars in general.
According to reports, two of India’s top ports, Kandla and Mundra, are looking to have Tesla to set up factories, after Elon Musk registered an office in Bengaluru in the company’s efforts to expand its business in international markets.

All said and done, Tesla’s entry into India has been a much talked about affair, but how the journey ahead pans out will depend on how the automaker negotiates all the bumps and curves of the Indian roads.