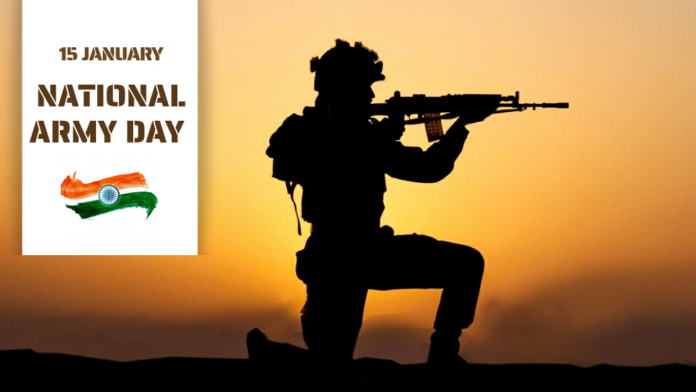 In 1949, General KM Cariappa became the first Indian to take charge over the Indian Army, on this day – January 15th – succeeding General Sir Francis Robert Roy Bucher, the last British commander. And ever since then, the Indian army has played a pivotal role in securing peace within the vast territory of the nation.

The Indian army consists of brave soldiers who stand firm against all odds, and are devoted enough to even lay down their valuable lives if their duty calls on them to do so. They hold extensive military positions and a large number of bases, and regularly conduct joint training exercises with the armies of USA, UK, Russia, and many other nations. The Indian armed forces have gained great renown for various achievements over the past years. One such glowing feat dates back to 1982, when the Indian army constructed the highest bridge in the world – the Bailey bridge in Ladakh. In 2013, the Indian Air Force carried out what was reportedly the largest civilian rescue mission conducted by any air force in the world using helicopters, Operation Rahat, when catastrophic floods occurred in Uttarakhand. These missions prove that no challenge seems too daunting for the Indian army.

The Indian army also holds the distinction of never commencing a war, always having fought only to protect India from external aggression or to provide aid to allies. In a nation with a colonial legacy, it is also remarkable how the army has stayed well within its purview, by being perfectly submissive to the democratically elected governments of the land. This is why the institution has come to hold great legitimacy and is held in high regard by most citizens. In spite of its tough task, and certain unfortunate chapters in its history, the Indian army largely continues to carry out its brief in a way that makes the citizens of the land feel secure.

Whenever we salute the Indian flag, we need to spare a thought for the selfless hard work of the army behind-the-scenes. And today, let us take a few moments to appreciate and honour every single one of these bravehearts working wholeheartedly to protect the nation.