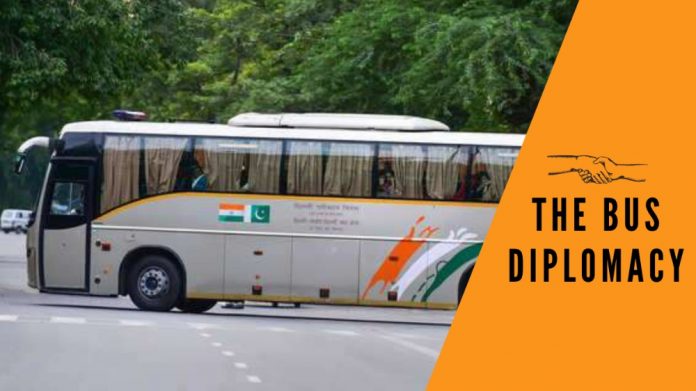 Twenty two years down the memory lane, on this very weekend – it was the then Prime Minister of India who travelled to Lahore, Pakistan by bus for the very first time. Termed ‘The Bus Diplomacy,’ this journey took place on the 19th of February, with the agenda to meet the Pakistani officials on the 20th & 21st of February 1999.

His words in Lahore were “Hum jung na hone denge … Teen bar lad chuke ladayi, kitna mehnga sauda… Hum jung na hone denge…” (we will not allow another war, for we have done it thrice and it was costly). This was a poem written by the then Prime Minister of India Atal Bihari Vajpayee and it was read in Pakistan as a remembrance, when the former Indian Prime Minister had passed away in 2018.

This ‘bus yatra’ was part of the confidence building measure that both the Indian PM and then Pakistani PM, Nawaz Sharif had taken in the SAARC summit in Columbo. This was the aftermath and huge international pressure to have good neighbourly relations after both the country had sent shockwaves to the world by doing nuclear tests.

During this visit despite still resistance from Pakistani security, Vajpayee went extra mile and made sure he visited Minar-e-Pakistan, a symbolic icon in Pakistan. As former Research & Analysis Wing (R&AW) chief A.S. Dulat mentions in his book, Kashmir: The Vajpayee Years, Vajpayee did not just visited the monument, he even wrote in the visitor’s book there: “A stable, secure and prosperous Pakistan is in India’s interest. Let no one in Pakistan be in doubt. India sincerely wishes Pakistan well.”

The “bus diplomacy” not just removed tensions from the only road linking India & Pakistan but also sent a message amongst common man that “war” is not always the solution, sometimes its just matter of “talks.”

Ironically, within months of such a historic diplomatic move, India & Pakistan were at it again, as they gots into another “jung” (war) – The Kargil War.

Facebook
Twitter
Pinterest
WhatsApp
Linkedin
Email
Print
Telegram
Previous articleDay of Social Justice
Next articleIf you could choose to be any animal, what animal would you choose to be?