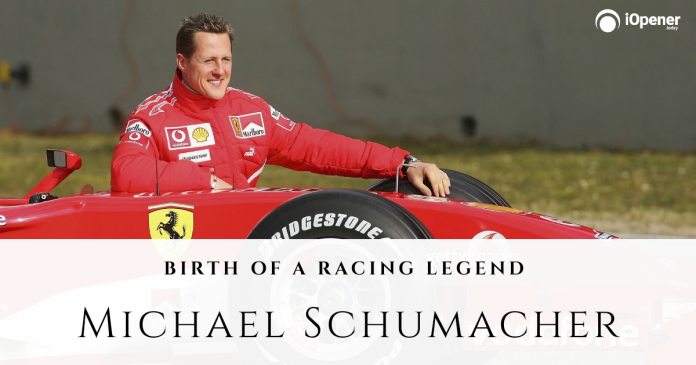 The Birth of a Racing Legend

One of the most successful drivers in the history of Formula 1, and arguably one of the great drivers in the history of motorsport itself! Five world championships with a single team, and seven overall – Michael Schumacher is in a league of his own. With the prancing horse alone, he had an incredible 72 grand prix wins and is revered as an absolute hero by the tifosi – fans of the Ferrari Formula 1 team.

Born on this day 3rd January 1969, Michael Schumacher is a living legend of motorsports. When he retired, he held the record for the most grand prix wins in Formula 1, just eclipsed by Lewis Hamilton in 2020. But he continues to hold the record for the fastest laps (77) and most races won in a single season (13), amongst many others.

Michael Schumacher started his racing career in karting and ended up as the only driver to win five consecutive World Championships between 2000 and 2004. During the course of his incredible Formula 1 career, he drove for four different teams, making his debut with Team Jordan in 1991. He later went on to drive for Benetton Ford, Mild Seven Benetton, and then of course the legendary Scuderia Ferrari.

Known for his extensive philanthropic and humanitarian works, Schumacher was appointed the UNESCO Ambassador in the year 2002.

An unfortunate skiing accident in December 2013, left Schumacher with a severe brain injury. He was placed in an induced coma for over a year and is still under recovery from that accident and has largely stayed away from the public appearances ever since. Interestingly, his son Mick who was with him at the skiing incident just made his own F1 debut with the Haas F1 team in the year 2020.